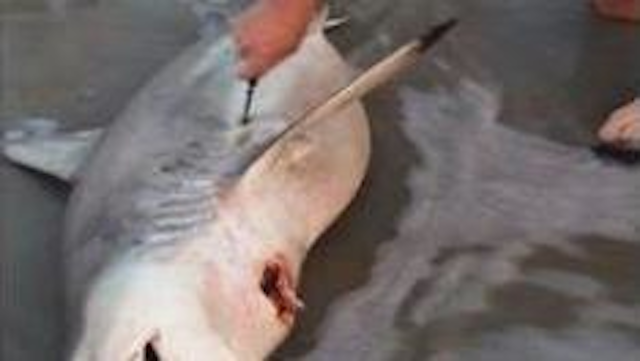 The feel good video of the year.

This is a really feel good video even if it is a little gross.

Basically, the story goes that a woman was walking along a beach somewhere when she noticed a dead shark had washed up on it, which makes a change from all these sharks that are usually just attacking divers viciously for no reason. But something wasn’t quite right: the shark’s stomach was still moving even though it was quite clearly dead. She quickly determined that the shark must have been pregnant and there were some baby sharks still  alive inside it and so quickly flagged down a passerby to help her out with it.

I’m thinking we’re in Australia with this video because the passerby just so happened to be carrying a knife and knew exactly what to do in this situation. He cuts open the shark’s stomach and exposes three live shark pups to the world and quickly throws them back into the ocean to fend for themselves.

You might think that’s a baptism of fire for the pups and they’ll die fairly quickly without their mother, but the opposite is actually true – shark pups spend up to two years growing inside their mothers then quickly swim away from them after they’re ‘born’ to avoid being eaten. So it’s pretty much no different to the natural process, although I’m not sure if these guys were aware of that fact.

Either way, you’ve really got to respect and admire these passersby for sorting the sharks out as they had no real obligation to at all, and those sharks wouldn’t be alive today unless they had. Extra props to whoever edited it and put some music that sounds like it’s from the end of an episode of Scrubs over the top of it for extra feel good points.