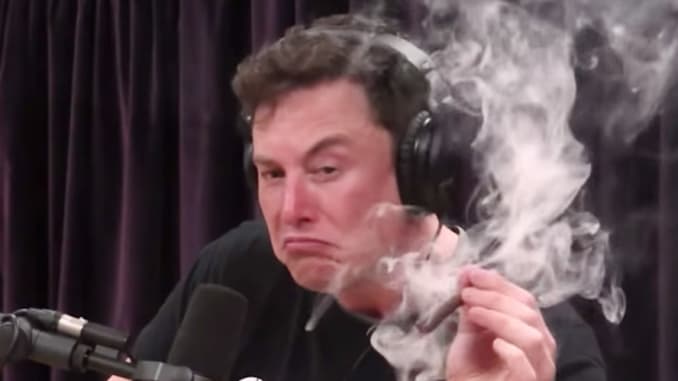 Elon Musk has apologised for lighting up with Joe Rogan on the JRE Podcast back in 2018.

The Washington Post got its hands on an internal email the SpaceX founder sent through the company saying sorry and that “it was not wise” for him to smoke weed with Joe Rogan.

He told employees that the company “maintains a drug-free workplace” and they shouldn’t make the same mistake he did, even though smoking weed is legal in California.

Musk said in the e-mail:

SpaceX personnel may not use or possess any controlled substance while in the workplace, and also may not be under the influence of legal or illegal drugs while at work.

Anyone who appears to be inebriated or under the influence while at work is subject to drug testing and potentially other employment actions.

Like that comment says Elon Musk did not inhale even a tiny bit so not sure what he’s apologising for. He took one puff and then blew it out of his mouth like it was poison gas. Then he looked at the blunt like it was an alien artefact from another dimension. But I guess even attempting to smoke weed on camera was a bad look for his shareholders and whatnot so fair play to him for apologising.

If you haven’t seen the episode itself, it’s pretty weird. They talk about how AI is going to take over the world and kill us all and you can’t help but get the sense that Elon Musk might be AI himself.

Anyway hopefully this is the last thing he’s sorry about for a while because Pablo Escobar’s brother has vowed to come after him after Elon stole his flamethrower design. Can’t be having that.