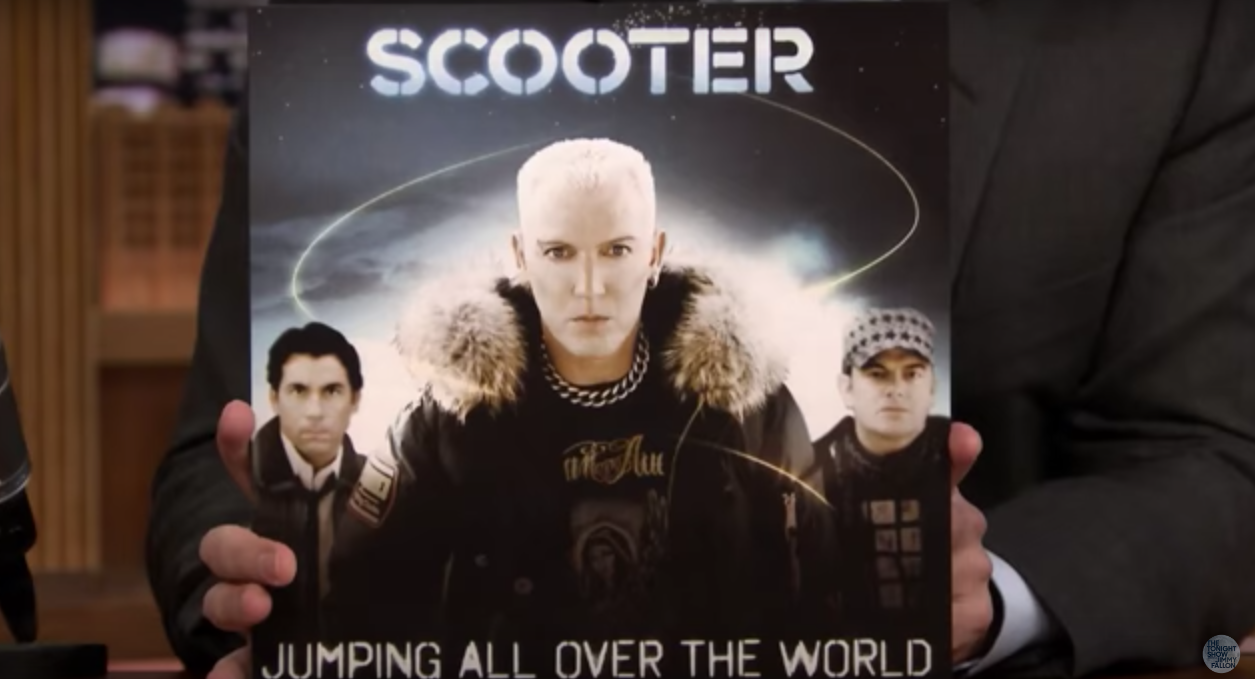 A familiar name cropped up in a recent airing of ‘The Tonight Show Starring Jimmy Fallon’, a name the majority of us had forgotten and banished to the realm of NOW That’s What I Call Music CDs and guilty pleasures past. That name is SCOOTER.

As part of the “Do Not Play” segment on the show, Jimmy usually lists off a bunch of music that should be avoided at all costs but this time we have to disagree. Any track by Scooter before 2002 is an absolute classic banger and will always have it’s own little nostalgic corner in our hearts.

(Skip to 1:20 to avoid the genuinely terrible Jim Post repeatedly warbling “I Love My Life” which makes us hate ours.)

It’s quite apparent that Mr Fallon has never previously heard of our German friends which is a bit sad really – presumably living a Scooterless life would leave you feeling empty inside. Whilst being hugely popular in Europe racking up over thirty million in sales and winning eighty gold and platinum awards worldwide, the techno posse never really hit it off over in the US.

Jimmy uploaded a follow up video in which he states that he’s now a big fan and used this opportunity to ask a couple of questions that fans have been asking themselves for nearly two decades. As well as obviously asking “how much was the fish?” he also wonders whether the fish was purchased for eating and whether or not it’s still around.

Frontman HP Baxxter took to Facebook to respond to ‘The Tonight Show’ and explain himself. Whilst standing on a particularly sunny beach in Ibiza, our seemingly ageless mate HP explains that he bought the fish for his studio but has since been moved away to the countryside as it was too noisy. He also jokes that the fish will soon be starring in ‘Finding Dory’, the upcoming sequel to ‘Finding Nemo’. The grand total price of the iconic fish is 3.80 – whether that means 380 or £3.80 we’re not sure. The currency wasn’t specifically named, it could’ve been Monopoly money for all we know.

Scooter are currently on tour to promote their eighteenth studio album and their latest single ‘Mary Got No Lamb’.

Speaking of Jimmy Fallon, do you remember the time when he brought back Kenan & Kel for a one off 10 year reunion special? Such a great blast from the past.