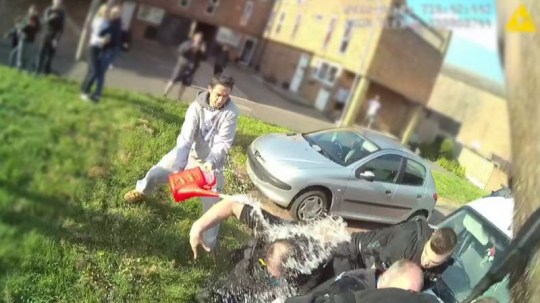 I always thought that most people in this country had a fairly amicable relationship with the police and we didn’t hate them as much as people do over in America, but videos like the one below make me feel as though maybe we are catching up to that level over here.

The video comes from May last year at Canvey Island in Essex, where police had been monitoring an event when they received reports of a motorbike driving dangerously. They eventually caught up with the motorbike and arrested him after and eight mile chase, but this attracted a crowd where a woman threatened them with a hammer and 28 year old Justin Jackson through petrol all over them whilst the rest of the crowd chanted at them to light the cops up.

You can watch the shocking footage below:

Here’s what Chief Inspector Jonathan Baldwin said about the incident:

One match, one lighter, one spark could result in us going up in flames and being disfigured for life or possibly even dead.

I don’t know how we didn’t just cut and run but then that’s not the way we’re wired – we all stuck together.

Eventually the cops managed to hold the crowd off and 90 police and firemen turned up to make more arrests and wash the petrol off of them. Justin Jackson was arrested and has now been sentenced to three years and nine months in jail. A 17 year old was also disqualified from driving and 47 year old Janine Jackson was found guilty of possession of an offensive weapon and sentenced to nine months in jail.

Sounds like everyone involved in the shocking incident has been punished, but I’m more concerned that stuff like this is even happening in some parts of the UK. Honestly never seen anything like it – hopefully making footage like this available to people will discourage anyone from ever do anything like that again. Really awful.

For more of the same, check out this video of a woman who can’t figure out how to park at a petrol station. Completely mind-blowing.