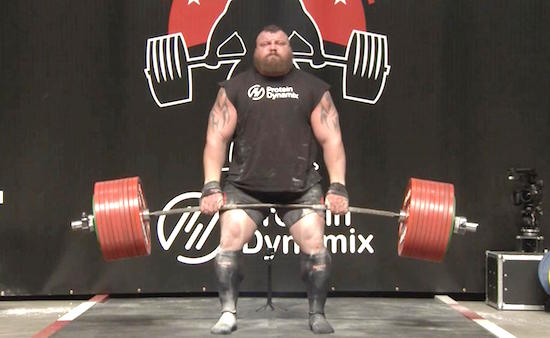 I’ll be the first to admit that I don’t know much about power lifting, but I do know that this video is absolutely badass and history in the making.

The video features power lifter Eddie Hall becoming the first person in history to deadlift half a metric tonne. That’s 500kg in case you didn’t know. This looks as if it takes some serious balls and discipline:

Ooft that was intense. I hope he’s OK after that because it looked pretty serious when he collapsed straight afterwards. I can’t really think of anything I’ve ever done that has been so intense that I’ve literally had to collapse afterwards, can you?

Hall said this after smashing the record:

That nearly killed me. The pressure on my body was surreal.

I passed out after. I had nose bleeds.

It’s not healthy doing something like that. But I’ve done it. I’m sure it will be in the history books for a very long time.

Doesn’t really sound like he was OK afterwards huh? Let’s hope Eddie has recovered now though and is enjoying his place in the record books. With what he put his body through, it sounds like he deserves it.

Here’s The Mountain from ‘Game Of Thrones’ getting battered in an arm wrestling competition by a guy half his size. Glad I didn’t put any money on that one.