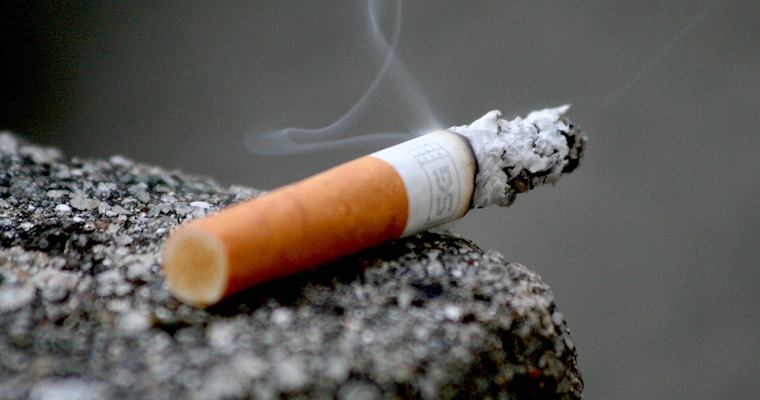 I think cigarettes are really gross and only ever smoke when I’m trashed which always seems to make my hangover 10x worse. I mean waking up with a hangover isn’t too bad, it’s just one of those things that you deal with, but when you wake up with fag burns in your clothes, a room that stinks of ash and you’re coughing your lungs up with the odd trace of blood every time you splutter, you’re really having a bad time.

â˜› Watch Next: Here’s How To Roll A Blunt — With No Hands

Watching this video makes me wretch with the thought of how much smoke this guy’s inhaling, not to mention how much he must be burning his mouth. The point of this trick? I have no idea. I guess the guy’s gonna get some YouTube views, but would you ever want to become famous for being the dude who could eat a pack of lit cigarettes? I wouldn’t. I’m pretty sure that I’ve seen someone else do this trick a few years ago, so it’s not even an original trick. It’s literally just some dude causing unnecessary damage to himself for the sake of me and you wasting 5 minutes of our lives watching him. He’s even billed the video as ‘smoking acrobatics’ which made me expect to see some really cool smoke tricks or something, but he doesn’t even do any of those. Kinda lame. Either way it’s pretty weird to see someone do this so check it out and even give it a shot yourself. Don’t forget to film it and e-mail it to us though, we’ll most definitely post about it.

â˜› Read Next: Justin Bieber Is A Stoner

â˜› Check This Out: Cats Smoking Weed On Instagram