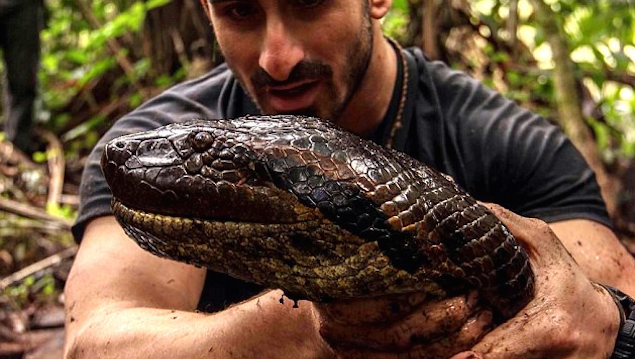 A few weeks back we ran a story on the  guy who was going to wear a special suit and get eaten alive by an anaconda as part of some special show on the Discovery Channel, and said show actually aired last night and was for all intents and purposes a massive disappointment.

This was because the idiot named Paul Rosolie didn’t even get eaten alive by the anaconda, despite this being the key hook that the show had been advertising ever since anyone had ever heard of it. Instead, Rosolie put on his dumb suit and tried to entice the anaconda to eat him but only managed to piss it off sufficiently that it instead tried to wrap itself around him and crush him to death.

Here’s what Rosolie had to say about it:

When I went up to the snake, it didn’t try to eat me right away. It tried to escape. And when I provoked it a little bit, and acted a little more like a predator, that’s when it turned around and defended itself.

Great, what a crock of shit. If you’re American and actually tuned in to the show (it airs over here on Friday) I feel sorry for you because all you actually get to see is Rosolie rolling around in the dirt with the snake for about eight minutes before he calls in his team to get it off him. What’s even worse is there was 90 minutes of build up before any of this even happened.

Absolutely pathetic and the Discovery Channel should be ashamed of itself for calling the show Eaten Alive. As for Paul Rosolie, I suppose he’ll just go back to doing whatever he was doing before the show because I doubt he’s going to get any offers to make any more documentaries any time soon because he’s clearly an absolute loser.

You can watch the official live stream from the Discovery Channel below but it’s on a loop which is kind of annoying. I’ve put in a stream from The Daily Mail website too but it has an advert on it which is also annoying. To be honest watching it isn’t really going to improve your life, and I’d probably recommend not doing it because it’s so boring, but if you want to it’s there.