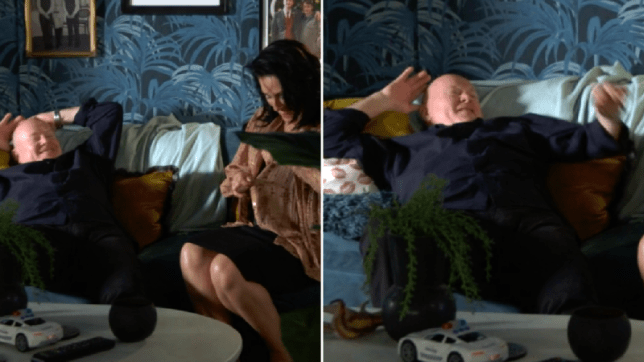 They did it on the couch.

I wouldn’t say that I was a regular viewer of ‘Eastenders’ but even I was surprised when I tuned in for the Christmas episode and saw that Phil Mitchell and Kat Slater were now dating and living together. How the hell had it come to this?

I’ve got no idea where the current storyline has been heading, but it’s quite funny to find fans of the show completely up in arms about a recent scene where it was implied Kat and Phil had sex on their sofa after Phil was released from jail. The scene began with Kat buttoning up her top and Phil painting from exertion, before little Tommy walked in and told Phil that he wanted to start calling him dad. Can’t see how that could have happened either.

Anyway, I can’t find a clip of it sadly but some of these reactions on Twitter are almost better:

Turned the tele on and EastEnders is on, Phil is still a nutter and now he’s lipsing Kat Slater. Mad show.

No Kat and Phil did it on the couch, I don’t wanna know, my eyes

Hurry back Alfie, I don’t know how much more Kat & Phil canoodling I can take #EastEnders

Phil and Kat shagging is my personal hell #eastenders

Sounds like it’s a good thing that I only tune into the Christmas episodes these days. Only five months to go until I’m seeing something equally revolting on my screen that will probably make me puke up my Christmas dinner. Rank.

For more of the same, meet the man who gives Phil Mitchell the recognition that he deserves. Legend.