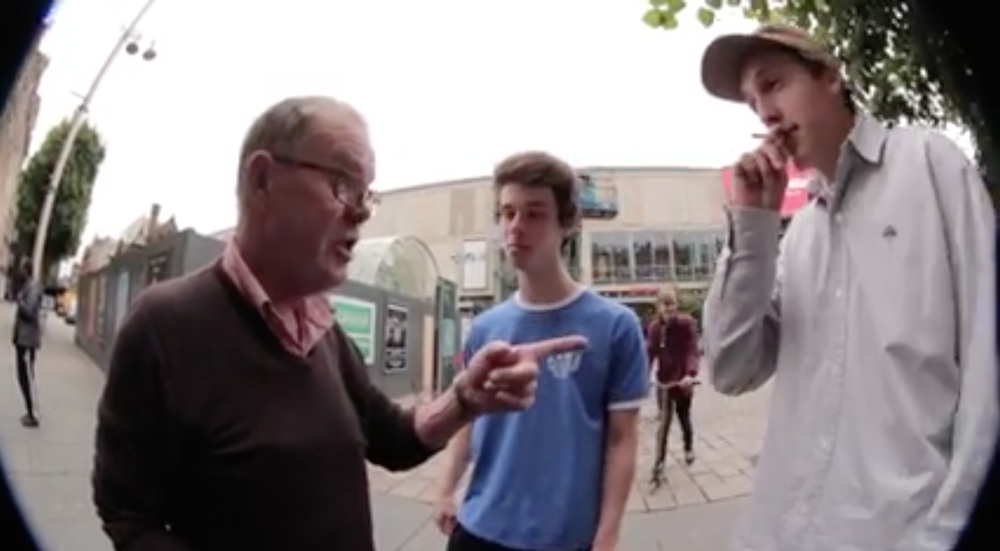 These kids handle this like pros and are a credit to skateboarders, because I would be pushed to breaking point by this jerk.

Back in the day there used to be nothing more fun than just skating around with all your buddies in town, maybe occasionally trying to pop a trick but mainly just chilling and hanging out. Those were the days and if you need any help in recalling them then check this out.

Occasionally though you would meet a member of the public – normally some crummy sad old dude with nothing better to do – who was offended by the fact that you were skateboarding in an area of public land where anybody is allowed to do anything and would inexplicably attempt to start shouting at you and telling you to move along. They would usually spend a significant amount of time arguing with you too – even though it wasn’t really any of their business and didn’t affect them in the slightest – and might even come to blows with you if you were really unlucky. All because you were annoying them by skateboarding for some reason.

This guy from Glasgow is the absolute worst though and a complete embarrassment to the human race. All he seems to want to do is say the same three swear words over and over again (I’ll give you a clue – they’re the worst ones), try to start fights with these kids who are about 50 years younger than him (and would probably batter him anyway), shouting at these kids, hitting the camera over and over again and not even being able to articulate why he was annoyed with them in the first place. Absolute scum.

Respect to the kids for holding back and not lumping the absolute tar out of him. The video seems long enough at six minutes and there’s loads of stopping and starting in it AND it goes on for at least another ten minutes after it finishes – I don’t know how these kids managed to show such restraint because I was almost smashing my computer screen having to listen to him.

Skateboarding is not a crime and people like this dude should just piss off back to wherever they came from.

Unfortunately had to deal with this yesterday