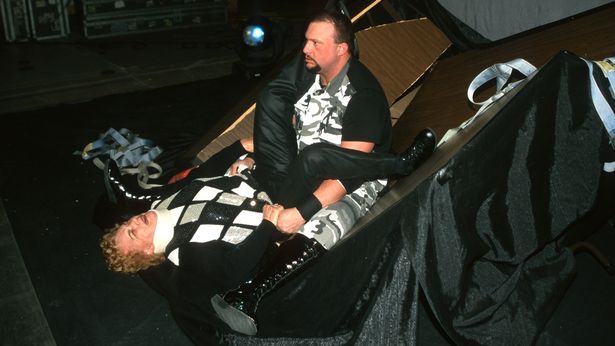 Gonna need a new hip after that.

The Attitude Era was probably the best time to be a pro wrestling fan, especially because of lunatics like the Dudley Boyz putting people through tables. One of their most memorable moments came when they decided to pick on Mae Young, one of the most legendary female wrestlers who passed away a few years back.

Mae Young was so hardcore that at 80 years old she took an insane powerbomb off the stage and through a table on WWE Raw. No one could believe what they were watching:

If you can find me any other woman that age who would agree to be involved in a stunt like that I’d be surprised. What an absolute badass Mae Young was.

The weirdest part has to be Bubba Ray looking like he’s jizzing in his pants afterwards. Whatever floats your boat I guess?

Mae Young was also an absolute joker, as Bubba Ray explains to TMZ in this clip. He reveals that Mae Young let rip a massive fart in his face as he was preparing for that move:

For more pro wrestling flashbacks, get a load of Hulk Hogan Vs The Rock in front of the loudest crowd in sports history.