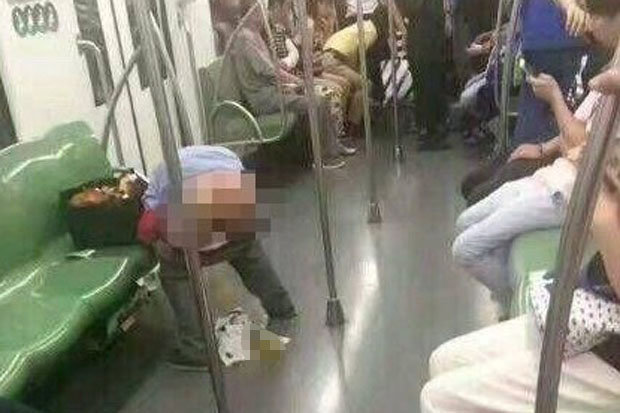 A tube passenger over in Shanghai was caught pulling his trousers down and shitting all over the train floor, even though he was only moments away from the next toilet stop. Bet the passengers had to be treated for PTSD after witnessing that.

Poo-gate occurred on the busy Metro line yesterday, and although no one was sat beside him, there were people sat literally metres away as he conspicuously let his bowels empty all over the floor.

In classic 2016 style, instead of stopping him or asking if he was OK, people just took pictures. Got to document this classic moment right?

Anyway, you’d think that this would be some sort of standalone, freak occurrence, but according to Beijinger Zhenyu Tan, people poop on the trains every now and then and he sees people do it several times a year.

He blames the lack of free toilets, which is fair enough (kind of) – Beijing and Shanghai are busy cities. However, that doesn’t explain this guy, who shat all over the floor in front of passengers despite being minutes away from a toilet. Even if he had a bad bum, just hold it in for the sake of the other passengers or at least don’t take your trousers down.

Still not as bad as the guy who shit in a supermarket and THEN a stranger’s couch while high on laughing gas.