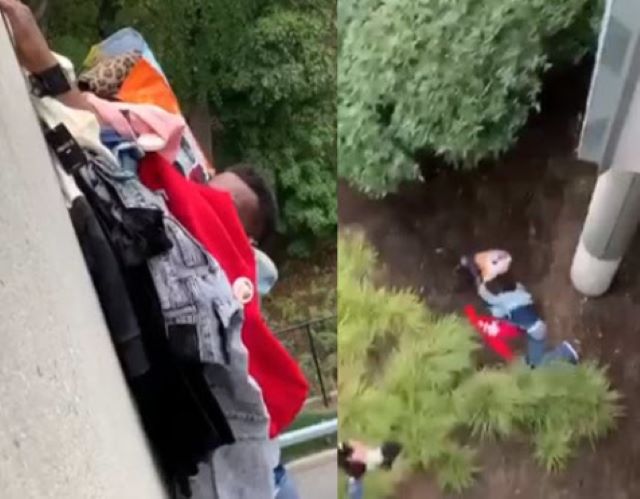 This lad has a death wish.

Let’s say you’re a shoplifter who is being chased from Forever 21 for stealing a bunch of clothes and leg it into the car park. Do you drop the clothes and run for freedom or risk death/paralysis by dangling off the side of the car park with the stolen goods still in your possession?

This guy chose the latter option and remarkably, it worked…?

Well I say it worked but he might have shattered an ankle or dislocated a knee there and just hadn’t realised it yet as his adrenaline is sky high. He did give a reassuring “aight, aight” on landing though so things looked promising for him at least. The guy filming wasn’t exactly being being helpful though, was he? Just repeatedly taunting the shoplifter and telling him that he’d messed up and had no choice but to drop down below and break all the bones in his body. I’m actually amazed he got up and staggered off as quickly as he did.

No idea whether police caught up with this kid or whether he wound up in hospital as I can’t find any info outside of the video that went up on Worldstar. I did notice some female items of clothing in his haul though so like to think he had stolen a few bits for his girlfriend as well and that’s why he was so determined to make it out of there. Now that’s what you call a good boyfriend.

For unreal footage of a shoplifter in Mexico jumping off a damn roof after being tasered, click HERE. No way she survived that, surely?