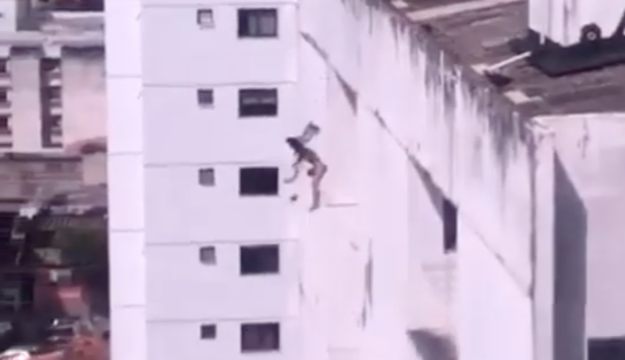 Was this intentional or did she overstep?

Over in El Salvador, Mexico, a young lady was clocked shoplifting from one of the stores and as the guards gave chase, she legged it into the elevator and managed to escape onto the roof.

As per Liveleak, the guards followed her up and shot a taser at her but instead of giving it up, the crazy gal actually leaps off the damn roof.

I mean I’ve heard of ‘hitting the ground running’ but I’ve never seen anyone actually try to pull it off from that height. In fact I think she might have been aiming for the ledge below and completely missed? Probably for the best that we didn’t get to see the end of that video but I’m guessing it did not end well at all.

Then again not ruling out the possibility that she landed in a giant swimming pool just below. Here’s hoping.

For the video of a London newsagent viciously slapping a thief 11 times for stealing from his shop, click HERE.