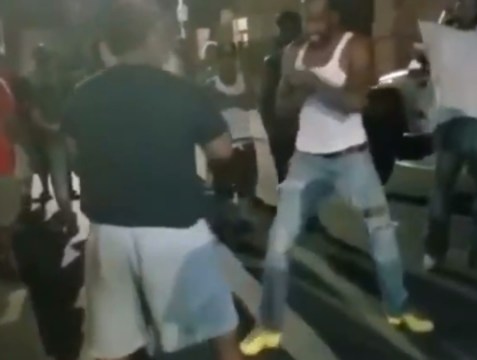 What the internet was made for.

With smartphones everywhere and fights being filmed 24/7, it’s pretty much impossible to lie about how a fight went considering everyone’s just going to end up watching it for themselves online and see you get your arse whooped.

That doesn’t mean you can’t still control the story somewhat though, as this man did when he discovered this video of himself basically getting jumped by an entire neighbourhood and thought he may as well provide some context to it. He ended up adding some hilarious commentary to it as well, and has ended up producing one of the funniest internet videos in recent memory.

What an absolute G. OK he did end up battered and bruised by the end of it but he definitely held his own against basically a whole gang of people beating him up and the way he dodged some of those cheap shots coming his way was nothing short of magnificent. “He ripped my shirt into a fucking cardigan” had me absolutely rolling.

So yeah considering how much the odds were stacked against him, it’s got to feel like something of a victory that he managed to go home with a new cardigan and at least one KO shot. Hopefully this kicks off a trend of more people sourcing fight videos they were involved in and providing entertaining commentary over it.

To watch a gassed up bouncer get knocked out cold with an outrageous two-punch combo, click HERE.