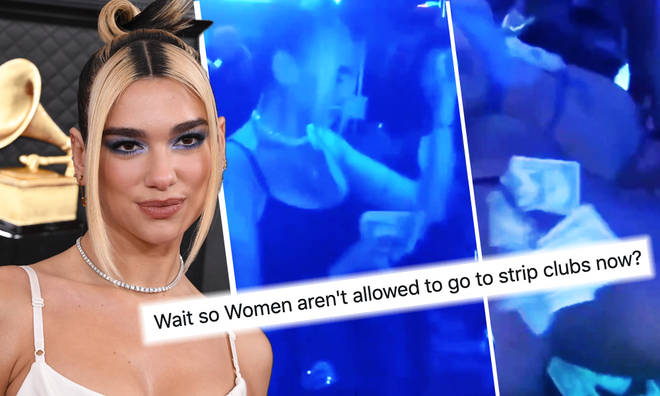 Another day, another celebrity ‘cancelled’ by the outrage mob.

The hashtag #dualipaisoverparty has been trending on Twitter this week after a user shared a video of the UK singer tucking dollar bills into strippers’ thongs and throwing cash at them as they knelt in front of her in a strip club.

You may be asking yourself – what’s wrong with that? Well apparently she’s ‘sexualising women’ (at a strip club? no way) and it’s a ‘hypocritical’ way for her to behave as a self-proclaimed feminist.

Anyways Dua Lipa is out here living her best life and y’all pressed over it #dualipaisoverparty pic.twitter.com/kWAUc5DsB6

Here’s the sort of hate she was getting from losers on the internet:

Not to worry though as not everyone on Twitter has completely lost their marbles – most people using the hashtag #dualipaisoverparty are defending her:

What’s really telling about the sort of people who push cancel culture on celebrities and even regular folk is the hashtag they used – #dualipaisoverparty. They literally celebrate the idea of cancelling someone and ruining their lives over something as harmless and consensual as throwing money at a stripper. Where do these losers even come from?

Demi Moore’s character in Striptease would be appalled:

Anyway, I doubt Dua Lipa will be affected by this in the slightest (in fact it’s probably great publicity). Which is just as well because I think most people would like her to stick around…

For the man who was jailed for sexual assault after ejaculating on a stripper’s leg, click HERE. That’s NOT what we mean by supporting sex workers, Mr. Chowdhury.