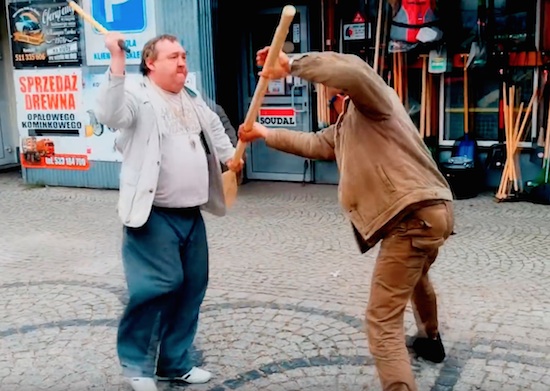 Truly one for the ages.

There’s nothing better than watching two old drunk guys duke it out in the street. Wait there is actually something – if they’re equipped with weapons and one of them is wearing sunglasses.

That’s exactly the scene we’re treated to in this video and it’s actually a really enjoyable fight. The two men pick up some kind of stick and an oar respectively then go at it in the middle of the street, with all kinds of spectacular twists and turns in their war for dominance:

Wow – how many great moments can one fight have, and it just got better and better. I mean I thought the spin kick and takedown were good, and I thought the guy having another stick in his pocket was great, but it really peaked with the finale where he just fell over and smashed his face on a bike when nobody was even around him. Truly one for the ages.

For more incredible drunken brawls, check out this drunk guy picking a fight with a professional MMA fighter. Like that’s going to go down well.