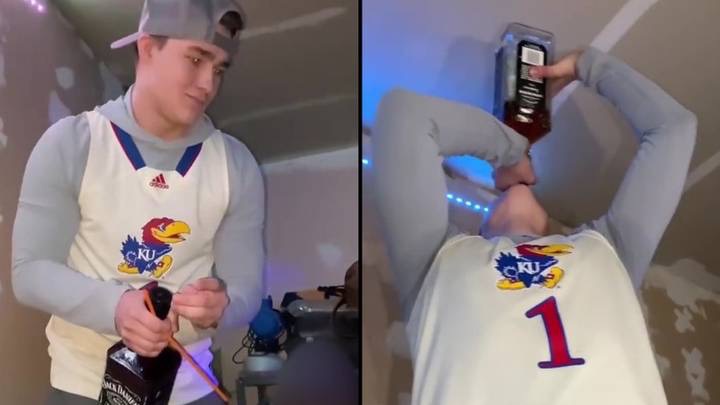 Been a pretty depressing first week of the year newswise, so here’s a really dumb story to cheer you up about someone being a complete and utter idiot and downing two litres of Jack Daniel’s in 18 seconds.

Whenever these videos crop up, I’m not really sure why anyone would want to do this because a) it’s going to be really rank and b) you’re going to be completely and utterly screwed after you’ve done it, but I suppose you do have to admit it makes them look kinda hard. You never see the aftermath though and that’s surely going to be horrifically embarrassing, so it kinda subverts the whole process.

This time we’re over at the University of Kansas, where 19 year old student Jaleb Gann thought it would be a great idea to strawpedo the bottle of Jack Daniel’s to ring in the new year. Many people condemned him for posting the video on his TikTok account, but Jalebl decided to fire back at them with the following justification:

It’s not the best idea for me to be bragging about it on TikTok. But like I tell most people, it’s not cool but it is impressive. Not many people can chug that much even with water.

It definitely is dangerous, it’s a dangerous move. I’ve been drinking like crazy this last year and I’ve casually been building it up and made it to 1.75 litres and now I’ve got it.

It wasn’t really a target. At first I never knew I could drink that much. Once I realised I could just keep adding more and more then it was like ‘how much could I reach?’. Once I made it, it was a big deal.

With my science background I am concerned about what the chugging does [to my health] but regardless I’ve been doing it since Halloween this year.

There is a worry that younger people will try and repeat it [after watching my TikTok] because this is a world record feat. It’s not an average person type feat.

If somebody were to die from it, I would feel terrible but I can’t control what everybody does.

I do see possibly the record being broken one day. If someone were to try it, that is quite scary, especially if they think they’re going to do it on their first try ever.

As of right now, I hold the world record so I plan on stopping. It depends on if that record gets broken and how old I am and if I feel like doing it any more.

Another guy drank 95 percent of a 1.75ml in 30 seconds so didn’t even manage to finish the full thing. I consider myself to be the fastest to do it as I finished the whole thing in 18 seconds.

And I’m the youngest to ever do it too.

Wow. What a long way of basically saying ‘I’m a moron’. Bet he’s probably a Trump supporter as well.

Anyway, if you’re even thinking about it then don’t bother. Trust me it’s not worth it and nobody even thinks you’re cool judging by the reaction to his video. Wish someone would post up how he was acting afterwards as well

For more of the same, check out this guy trying to down the world’s largest Jagerbomb. Ridiculous.