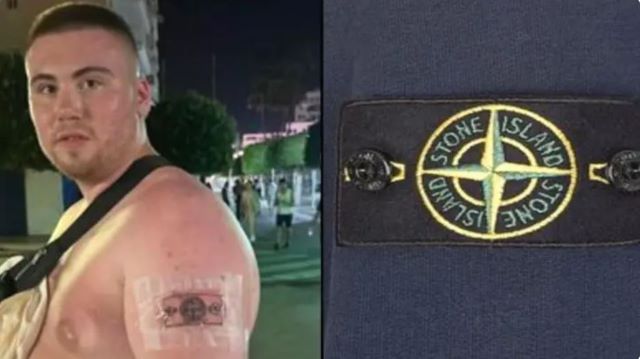 Stone Island has become something of a meme brand given its association with Liam Gallagher, old school football hooliganism, and the waves of Stone Island badges you see at grounds like Burnley and Milwall.

Well, Bolton Wanderers fan Nat Conway has taken the Stone Island meme to the next level by getting the logo tattooed on his arm on a night out. Although as The Daily Star first reported, it was a shock to him and all: 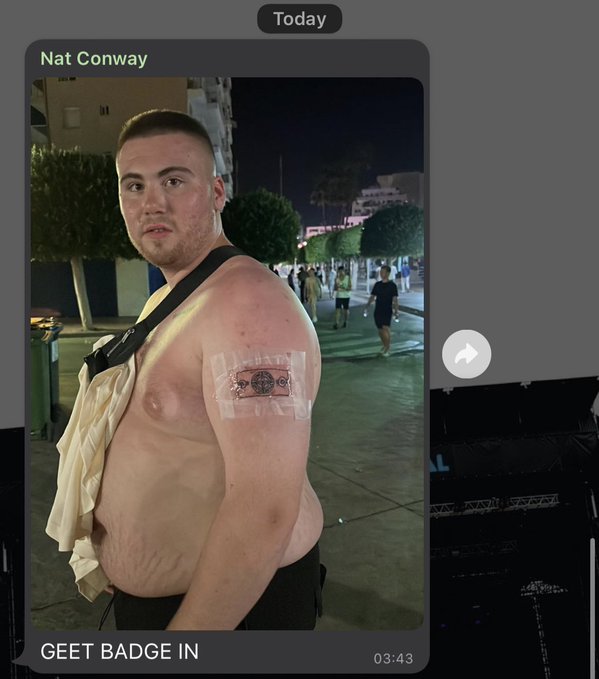 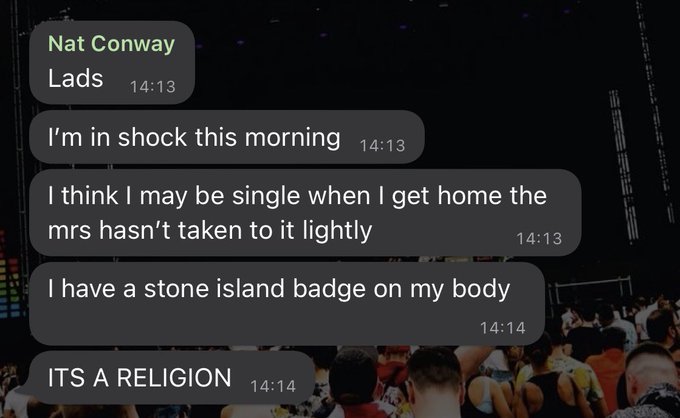 Nat Tweeted out the image and tagged the handle @badge_is_in, a parody account dedicated to images of people wearing Stone Island gear. It’s a lot more exhilarating than it sounds. Here are some examples of Stone Island badges in the wild:

Pose and camera position on point. The swan won’t be going any closer when he clocks the #badgein.

He’s trying to look what’s in the bag, he doesn’t want a slice of Warburtons, he wants his own badge.

Give him one and he’ll be on the banana bus this season.

You wouldn’t fancy your chances against him, the badge placement means he knows what he stands for.

Ripping people to shreds to fuel his own drug addiction, what an animal.

Somehow the attention here has been stolen by the #badgein.

It’s absolutely textbook. Perfect 90 degree angle, edge of the frame and even managed to keep his face out of it.

The police will have a hard time identifying him after his altercation with the away fans.

You’ve got to think about the different options here.

1. Protect the badge from the elements
2. Expose the badge but get the #badgein

Is it even possible to scare clouds away? He’s giving it his best try.

When all the aisle seats are already booked, you’ve got to improvise.

No chance he was sitting on the left side.

Ryanair may be cheap, but with 30kg of stoneys in the suitcase he’ll have spent a small fortune on luggage

Do you offer priority boarding with a #badgein @Ryanair? https://t.co/SwVajgZ5bH

Forget baby on board stickers, badge on board is the new phenomenon!

Sending out a warning to anyone wanting to attempt the overtake.

He made sure he bought a car without the rear window tinted window for a reason.

Speed cameras see the badge, not the number plate.

Big Paddy McGuinnes with some of the best arm placement you’re ever likely to see.

Almost dislocating his shoulder to ensure full exposure. He’ll have no ladies turning their lights off, mainly out of fear.

What do we have here?

Technically, there’s 4 badges in a radius of about 20cm.

There’s something not quite right here though, but we respect it.

I’d love it if stone island actually started making jeans like this, lads would be able to break the #badgein world record.

There you have it. You’re probably no further than 100m from a Stone Island badge right now, or anywhere you are in the world. All you’ve got to do is keep an eye out.

Good luck to Nat Conway and his girlfriend anyway. With how viral his Tweet has gone, he might even be looking at some free Stone Island gear as a consolation to getting dumped by his missus. Not a bad compromise.

For the man who donated his kidney to save his girlfriend’s mum’s life, only to be dumped by his girlfriend a month later, click HERE. See Nat? It could be worse.