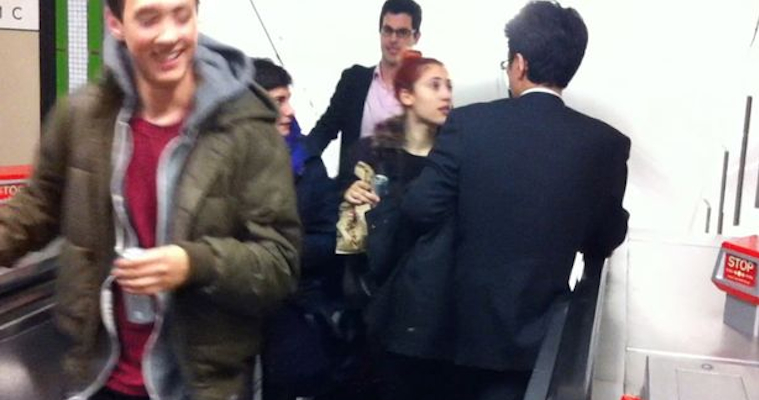 Everyone has probably been blackout drunk a few times and done some crazy shit they shouldn’t have and probably don’t even remember. I don’t think anyone has EVER been as blackout drunk as this Japanese businessman stuck on the escalator though.

This is pretty fvcking bare jokes. Now, I’ve been blackout drunk a bunch of times and I’ve done some things I’ve regretted, like tell some girl I didn’t really know that well that none of her friends liked her and then cut my hand open on some broken glass and bleed all over my friend’s brand new couch (although looking back on it neither of those things actually seem that bad), but I don’t think I’ve ever been as blackout drunk as this guy in that I’ve never tried to go down an up escalator for about five minutes, or ever tried to do anything that is clearly wrong for a sustained period of time when people are yelling at me that I’m doing it wrong. I know that Japanese guys are meant to be lightweights but come on guy, hold it together, just say no!

â˜› More: Blackout Drunk Last Night? You’ve Got Nothing On These Dudes

This video was filmed at Tottenham Court Road on the interchange in between the Northern line and the Central Line. The guy who filmed it is called Sam Napper and he thought at first that the guy was just conning around with his old pals from the investment bank, trying to get some cheap lolz. He soon realised though that this guy definitely wasn’t laughing, and was on his own trying desperately to get home. Maybe in Japan escalators look different or something? I don’t know I’ve never been there but surely they can’t be that different right? Not enough to confuse this guy. Anyway in the video he just keeps trying over and over again to walk down the escalator but to no avail. Even when people grab him and shout at him and tell him he’s going the wrong way he is unrelenting, he just keeps going. It’s almost like he’s on bath salts or some other kind of drug.

I’m guessing what happened was the Japanese businessman went out with some city lads (who obviously know how to drink as it’s all they ever do) who thought they’d fvck him up a bit, and well, I guess they succeeded and they’re probably all laughing at him on the floor right now trying to get down the escalator. They got him good and proper. Lads. Banter.

Apparently someone eventually rpessed the emergency stop button and let him out of his misery, but if this video is anything to go by then it seems like he was there for a long while. It’s my birthday in a couple of days, I hope I don’t get into that state. Check it:

â˜› More: Drunk In The Funhouse