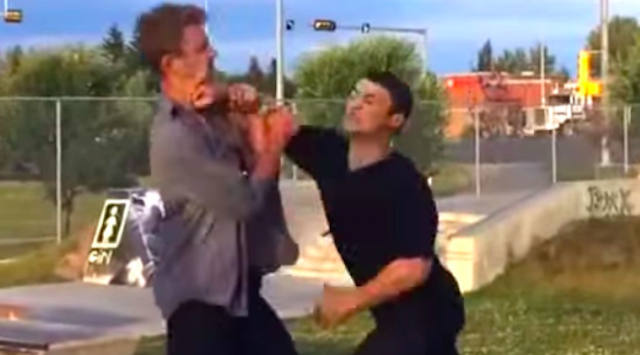 Don’t pretend you’re something you’re not, especially if it’s gonna get the shit kicked out of you.

Don’t you just love it when a complete and utter asshole gets exactly what’s coming to them? This is exactly what happens in this video where some drunk guy (or maybe freaked out on PCP or something) is hanging out a skate park picking fights with some skaters who just want to hang out all day flipping tricks or whatever.

The guy is told to move out and go away multiple times, but instead continues starting on this one safe skater dude and telling him he’s a Tae Kwon Do master. It doesn’t look so hot when he tries to do a spin kick and falls over though. After some more posturing, the skater unleashes some fists of fury on him, and then whoops the ass of his white boy with dreadlocks’ mate who tries a sneak attack on him too for good measure.

Gotta love justice. Almost as good as the 34 year old man who got beaten up by a 17 year old drug dealer when he refused to pay him for the weed he was buying off him.