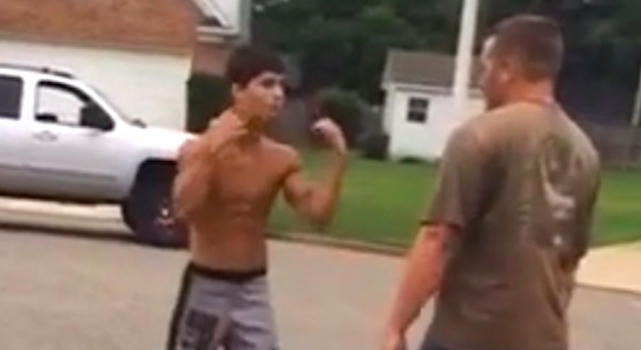 The old dude gets completely murked by the youngster in one of the most unfair fights ever.

Well, this certainly isn’t a fair fight. I’m not sure if this is 100% true as the video starts halfway between the argument between the two, but allegedly the older dude had got weed off the young kid but refused to pay for this. I’m not really sure how that works because if I was a drug dealer I wouldn’t be selling any weed until I got the money in my hand, but this kid is tough as nails so maybe he does business a different way.

In any case, like has been implied all the way through this article he absolutely rips the older dude a new one. First he constantly calls him a bitch, then when he tries to take him down he locks in a chokehold and chokes him out in the middle of the road before unleashing a flurry of punches on his unprotected head. with brutality like that, it probably won’t be too long before the kid graduates into the big leagues and becomes a Mexican drug lord.

The best part is that the old dude even tried to tap out halfway through the assault but the kid is having none of it. When he finally lets him up, the old guy even berates him about it, saying ‘if someone taps, you let them up’. Not in the street son.