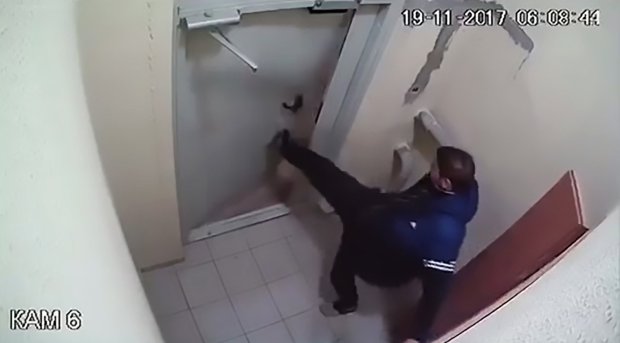 I’m not gonna lie here – there’s definitely been a few times in my life when I’ve been too drunk to do something properly, but I don’t think it’s ever been as big a problem for me as it was for the guys in this video.

The video comes all the way from Russia (of course) and features two drunk guys desperately trying to open a door for three hours. It’s pretty early in the morning (like 7am) so it’s fairly clear that they’ve been up all night sessioning, but for all their combined brain power they just can’t figure out how to open this door, literally using all their might to try and force an opening.

Unfortunately for them, it’s not a push door but one that you need to press a button to get out of. After about three hours of trying though they finally spot it – despite it being in a really obvious position – and make their way to freedom.

You can watch their antics below. Don’t worry it isn’t three hours long, it’s edited:

What an absolute wally. Favourite part is probably when he manages to attack it with literally all his might and manages to open it a tiny little crack and then a rat comes in and scuttles off. Must be pretty frustrating see

For more of the same, here’s a drunk guy getting absolutely obliterated by one punch from a bouncer. Unlucky pal.