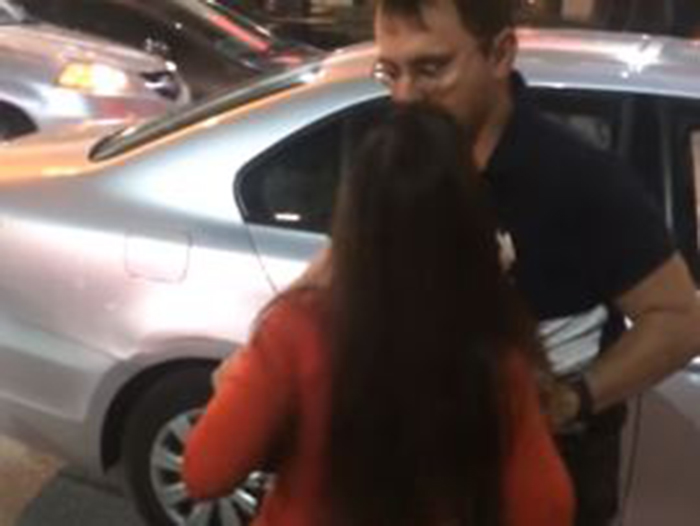 Sunday night in Miami, Fl (Mary Brickell Village) —  We were on the phone with this uber driver while he pulled up to our location. Out of nowhere the girl in the video gets in the backseat of his car and won’t get out. We told the driver it was ok, to just cancel our ride, but he did not want to take her anywhere so he kept telling her to get out.  Eventually the driver gets out and says he’s calling the cops to get her out of the car. After a couple of minutes of the driver pretending to talk to the cops (im assuming he was pretending because they never showed up at first), the girl decides to reach into the front seat, grab his keys, and start walking away with his keys in her hands…. That’s where the video starts…  The police finally showed up after this video ends. The girl was in a taxi cab about to leave when the showed up and they had to stand in front of the taxi and tell him to stop. The girl eventually got up from the area the cops had told her to sit and wait, and tried to walk away from the scene.  Once in handcuffs, she then tried kicking some of the police officers on the scene. It was only when they put her in the police car that she started crying, apologizing, and claiming that she would lose her medical license (she claimed to be a neurologist) if she got arrested.  The Uber driver was too good of a person and decided to take a cash settlement instead of pressing charges. In his words, “…she was crying (and) said (she) was sorry for everything.” I don’t want to disclose the amount the driver was paid, but can say he could only use the money to pay his cellphone bill and maybe his cable bill.

What an absolute nut job. Just the ultimate drunk bitch move to destroy someone’s property like that. What can the Uber driver realistically do about it? Fuck all, that’s what. He just has to stand there and take all the physical and verbal abuse from this girl because if he reacted he’d probably be the one who winds up in prison.

I’m telling you, it’s a tough life being an Uber driver.