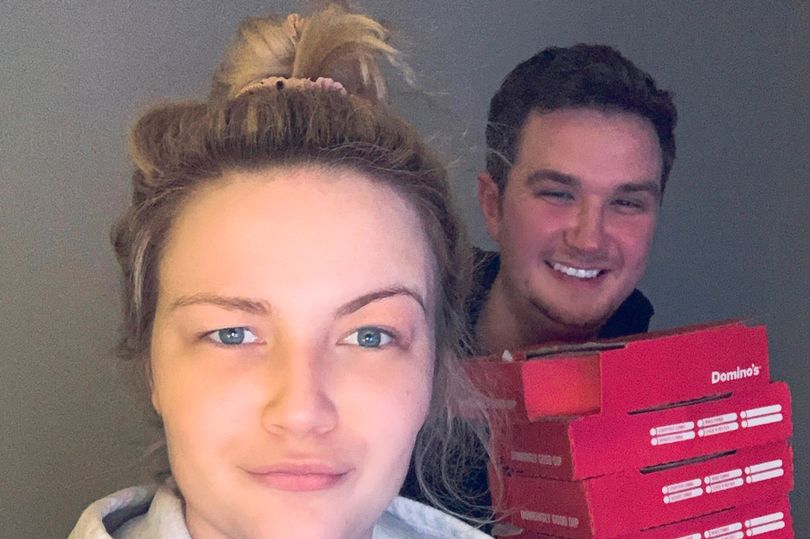 I think that all of us have probably ordered something by accident after not looking at our basket properly before we checked out, but I don’t think too many of us will have made as much of a screw up as 29 year old Lee Rumney did over the weekend.

Lee has been out for a 12 hour drinking session in Sunderland to celebrate the birth of his six week old son Freddy, when he decided to order a pizza on his way home. So far so good, except the only problem was that Lee was so wasted that he somehow managed to whack 15 portions of chicken wings in his order.

His girlfriend Hannah Eddon wasn’t best pleased when she opened the door to discover the mountain of food, which also included a portion of wedges, garlic bread and a box of cookies. Here’s what she had to say about the experience:

He wasn’t texting in full English and when he came through the door he was crashing into all the doors and bouncing from wall to wall.

But he couldn’t remember a thing in the morning.

He went upstairs to lie down and asked me to wake him when the delivery showed up.

When I answered the door the guy said there’s quite a lot here, he must be having a party.

He told me there was at least 15 boxes of sides and I started panicking thinking ‘I hope he’s paid’ because I only had £20 cash on me.

I had to get the delivery guy to help me bring it all into the kitchen. There was so much of it, I was so embarrassed.

But when I went upstairs to tell Lee his food was here, he was just completely passed out on the bed and wasn’t waking up for anything.

I was just stood there with all these boxes and the smell of chicken wafting through the house, I was fuming.

It’s a good job I’ve got a sense of humour and in the end he was the one who felt stupid.

He was absolutely devastated when I told him he’d spent £177 on Domino’s. 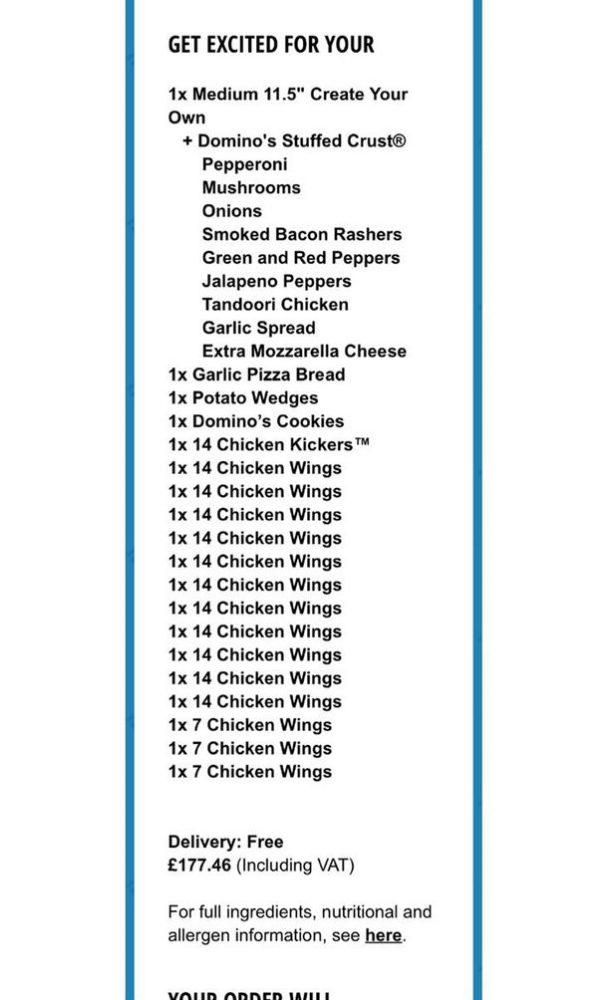 Lol you just knew he was going to be passed out on the bed when she went up there didn’t you? Not really sure this is that different to thousands of relationships all over the world to be honest, other than the guy having spent so much money on chicken by accident.

Emma wasn’t letting him get away with it that easily though. She’s banned him from ever ordering Domino’s again and has also forced him to eat all of the cold chicken he ordered over the last three days. That doesn’t sound that bad considering he probably really likes chicken and he can just order a Pizza Hut or Papa John’s in the future if the urge takes him. Sounds like he got off lightly.

It’s also really funny to look at his bill and try to figure out his brain process – obviously he must have figured they were out of the 14 wings option after ten goes of putting it in, but damn he wanted those wings so just switched to the 7 wing option instead. Obviously that didn’t work out either, or at least not in the way that he had hoped it would.

For more of the same, check out this new Domino’s pizza that boosts your brain power. Sounds like Lee could use some of that.