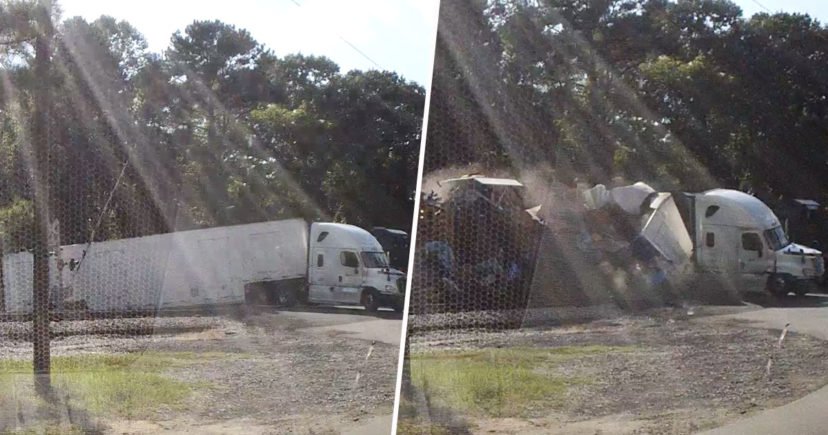 Whenever I see a level crossing I can’t help but think about how dramatic and exciting it would be to see the train come gallivanting through and completely smash up a car that was parked there like it was a big budget movie or something, but alas I’ve never been able to experience that in person so this video will have to do.

The video comes from a driver in Norfolk, Virginia, who turned around the corner to find the massive lorry stuck in the middle of the level crossing with the lights flashing. Two men scramble to get out of it in time before the train smashes into it and completely obliterates it. Blam – that’s all she wrote.

Here’s what the driver said about the incident:

[I] turned the corner to approach the crossing and found the tractor-trailer stopped on the tracks with the crossing guard down and the lights flashing.

The driver of the truck and a passenger were in the cab of the tractor up until a couple of seconds before the train hit. A third person was already out of the truck.

The train hit the trailer which must have cut the brake lines to the tractor which rolled off the road after impact. The driver emerged from the other side of the tractor once the train had stopped. No one, to my knowledge, was hurt.

That’s great that nobody was hurt but I imagine the owner of that truck is gonna be pretty miffed. I imagine there might be some damage to the train as well that isn’t too hot. Still, pretty awesome video right?

For more train crashes, check out the aftermath of a commuter train crashing into a station. Pretty grim.