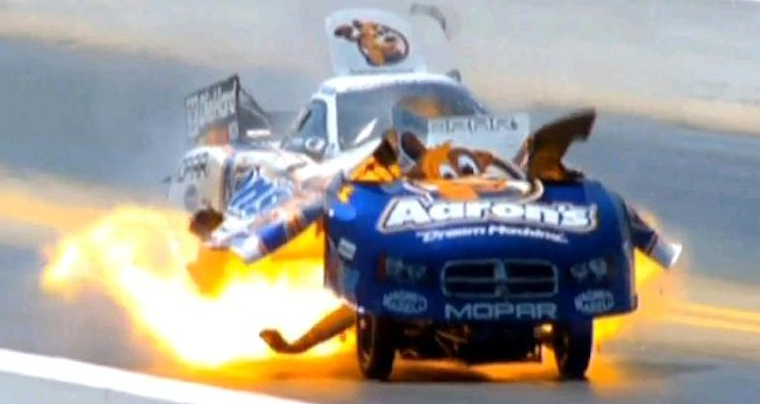 Drag racing always struck me as being really, really boring, but maybe I should give it another chance because this video of a drag racing car exploding is fvcking killer.

I don’t really know anything about drag racing and I don’t really want to because it seems really fvcking boring. How can people get excited about watching a car go really fast for about three seconds and then have a parachute pop out of it and seeing how far it goes? That shit is boring, I mean it’s kind of cool when the car goes really fast and has fire coming out of its ass but that’s over in three seconds and then you just get ten seconds of it dragging along the floor and seeing how far it goes. Great. Get me another beer. Despite this though somehow it seems like drag racing is one of the biggest sports in America – predominantly in the south of course – although bizarrely (?) it isn’t as popular as Nascar. Whatever, both suck.

If drag racing was always like this next video I would definitely pay to see it more often (more often!?!?! I mean just once…) though, absolutely. In this video, the guy is doing the drag race like any other time he’s done it and he blasts the nitro or whatever it is that unleashes the flames at the back of his car and he races off into the lead over his opponent who doesn’t look like he’s ever competed in a drag race before judging by his handling of the vehicle. Then – BOOM – his car literally explodes and all the outer casing flies everywhere and he’s just left sitting in a seat  that’s on firewith a parachutec attached to the back of it which is slowly coming to a standstill. Being the sickhead that he is (and probably semi-used to this) the driver doesn’t seem to phased and just stands up, milks the adulation of the crowd and then walks off. It kinda looks like he’s walking into a chain link fence though so maybe he is a bit more shaken up than anyone gave him credit for.

This video is even better than your usual one too because it also features a camera view of the explosion from the driver’s perspective inside the car and having seen that I’m not really sure how he looked so nonplussed about it at the end because it literally looks like he was engulfed in flames at one point. It’s scary. Check it out below: