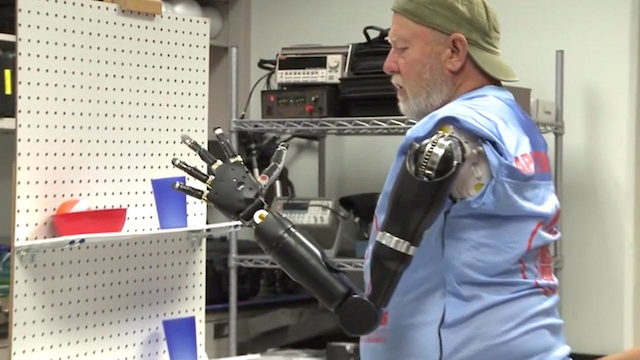 The future gets a little closer every day.

Lee Baugh lost both his arms and shoulders 42 years ago in a freak electrical accident and never thought that he would ever hold anything in his hands again. And who can blame him? Back then the idea of a bionic arm was pure science fiction.

Fast forward to 2014 though and Len is holding a cup in his incredible new bionic robot arms, thanks to the John Hopkins University Applied Physics Laboratory over in Baltimore. The arms work by making a neurological connection between them and the remaining nerve endings in Les’s shoulders. Consequently he can now control his arms via his brain, and can even move individual fingers and rotate his wrist. It’s probably a bit too early to think about popping a girl’s bra off with one of them though unfortunately.

Despite this, Les is understandably thrilled about his new arms saying:

Maybe for once I’ll be able to put change in a pop [drinks] machine and get the pop out of it. Simple things like that most people never think of, and it’s re-available to me.

After 42 years without arms – probably more of his life without them than with – it’s got to be a good feeling to be able to do all the stuff you couldn’t do all over again. The manager of the programme, Mike McLoughlin likened the technology to the early days of the internet, saying they were just getting started and that he hoped to develop it to much higher levels in the coming years with the ultimate goal of being able to provide every soldier who had lost a limb at war with a fully workable bionic one. Let’s hope that happens sooner rather than later.