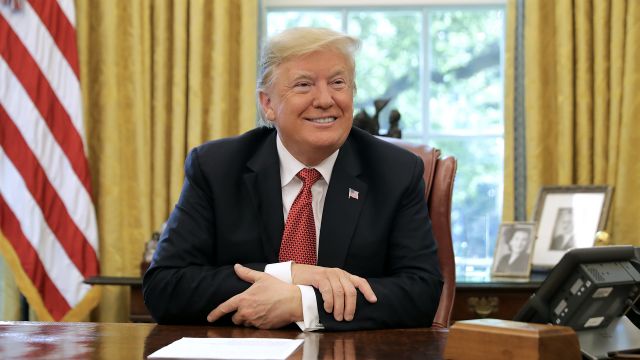 Never mind the fact that we’re dealing with an unprecedented pandemic and the United States are performing terribly in the battle against it, Donald Trump has decided that it’s time to talk about something much more important: how US shower head laws need to change because they keep ruining his hair.

At the moment, US shower heads can produce no more than 2.5 gallons (9.5 litres) of water per minute. On Wednesday, the Department of Energy proposed that this number be increased and it seems like this has come directly from Trump, who said the following at a White House event on rolling back regulations in July:

We’re bringing back consumer choice in home appliances so that you can buy washers and dryers, showerheads and faucets.

So showerheads — you take a shower, the water doesn’t come out.

You want to wash your hands, the water doesn’t come out.

So what do you do?

You just stand there longer or you take a shower longer?”

Because my hair — I don’t know about you, but it has to be perfect. Perfect.

In many places — in most places of the country, water is not a problem.

They don’t know what to do with it.

They don’t have a problem.

Sounds like he’s got it all figured out. To be honest I’m kinda surprised that it’s taken him four years to do all this because it sounds like it’s a subject that’s close to his heart – would have expected him to try and do something about it almost instantly.

Hopefully it gets sorted soon and their isn’t any downside to it (cough a horrendous amount of waste water) and we can finally see what Trump would look like with a good hairstyle. Gonna be worth the wait I’m sure.

For more of the same, check out when Trump reacted furiously about a picture of him with bad hair becoming a meme. Classic.