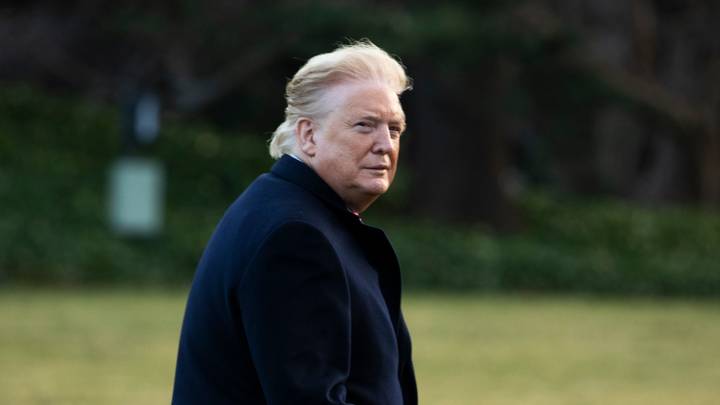 It’s not exactly hard to make memes of Donald Trump because literally everything he does is a joke but the picture that you see above might have been the best one of him that has ever been produced.

The picture appeared over the weekend and quickly went viral due to the fact that it looks like the President is clearly wearing fake tan thanks to the layer of white around his face which his hair would normally cover. Obviously Trump himself wasn’t too happy about everyone laughing at this meme and implying he tanned himself and waded in with the following explanation:

More Fake News. This was photoshopped, obviously, but the wind was strong and the hair looks good? Anything to demean! https://t.co/t8ptYMCYHf

Lol of course it’s fake news, how could it not be? Not sure if anyone is believing that as it seems pretty clear that it isn’t, but even if it was I doubt anyone would really care because it’s so funny.

Anyway, here are a couple of the best memes/tweets about it too:

To underscore his commitment to coal, Donald Trump stuck his face into a blast furnace for a full minute. pic.twitter.com/6U3fpVqGRC

Nope. You do not look normally pale on other photos. Here someone has actually removed the fake tan. Just so everybody can see, what you really look like without the fake tan. pic.twitter.com/1NT5V4Sl9d

Nope. You do not look normally pale on other photos. Here someone has actually removed the fake tan. Just so everybody can see, what you really look like without the fake tan. pic.twitter.com/1NT5V4Sl9d

He looks like Tupperware after you’ve stored Spaghetti and Meatballs in it.

This is why you don’t lean in to light your friend’s farts pic.twitter.com/BAzUUhgTtg

At this point I’m assuming Donald Trumps make up is done by a team of rough as fuck pissed scally girls from Huyton who tell him he looks ‘Dead lush’ every time he goes out… 😬 pic.twitter.com/wrqpzLvcqI

For more Trump, check him out hanging out with Vince Vaughn the other week. That was a weird interaction.