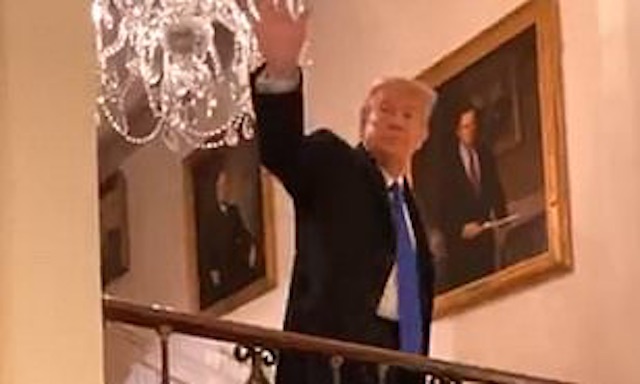 Donald Trump may not have officially conceded to Joe Biden yet and is probably still holding out some hope that he can prove his dumb election fraud theory, but that hasn’t stopped him announcing that he’ll be running for President at a maskless party at The White House last night.

The party was attended by a bunch of people from the Republican National National Committee and was one of the Trump administration’s first holiday receptions. Oklahoma GOP Pam Pollard live streamed the event via her Facebook account and it clearly showed a whole load of people hanging out in close proximity to one another without masks, directly contradicting the advice that the US government has issued to try and stop people spreading the virus over the festive period. No point in Trump changing his policies at this point during his Presidency I suppose.

Here’s what he had to say regarding the election and his possibilities in 2024:

It’s certainly an unusual year. We won an election. But they don’t like that. I call it a rigged election, and I always will.

Crazy how he can still constantly spout out statements that have been categorically proven false and believe them, but again I suppose he’s been doing that his whole entire life so why bother changing things up now? Looking forward to 2024 – sure it will be another banger.

For more of the same, check out Donald Trump getting really upset on the golf course recently. Wonder if he had something else on his mind?