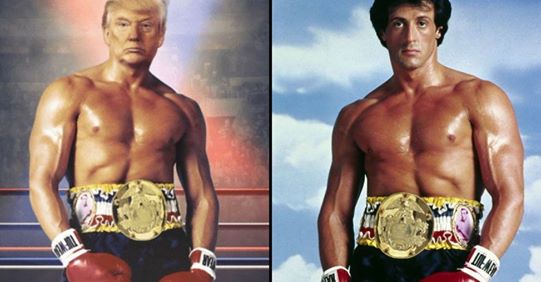 I’m sick of opening articles about Donald Trump saying that you can’t expect him to get any weirder so I’m not gonna even bother this time and just lead straight into it: for some reason Trump has decided to tweet out a photoshopped picture of him as Rocky Balboa.

That’s it, no context, just a picture of Rocky’s body but with Donald Trump’s face. Take a look at it yourself:

Well, what the hell is all that about hey?

People started speculating that it was some kind of weird celebration of Rocky IV because it was released on November 27th and it was November 27th yesterday but why would he want to do that? Well, maybe it could have something to do with Rocky travelling over to Russia to box the supposedly unstoppable Ivan Drago – who recently killed his best friend Apollo Creed in the ring – and eventually emerge victorious, and this is Trump ‘subtly’ trying to state that he’s going to destroy the Russians?

That kinda makes sense in Trump’s warped mind but there is also the problem that the photograph he’s used of is Rocky from Rocky III, not Rocky IV – although I suppose this fits in with Trump’s persona as he doesn’t exactly care about the details. The bigger question would be just how he found this picture – is he spending his time as President Googling Donald Trump memes? Or just ‘tough looking boxer Donald Trump’ or ‘Donald Trump abs’ or similar?

What a time to be alive. Happy Thanksgiving.

For more Donald Trump, here he is fist bumping the Queen. Awful.