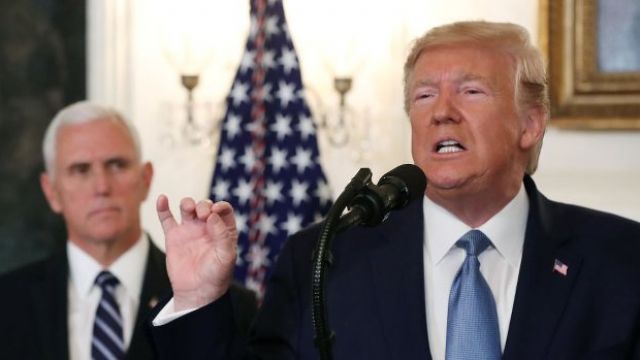 Donald Trump has always had a penchant for saying stuff that’s completely ridiculous and untrue, but he’s 100% outdone himself with this latest statement where he suggests injecting bleach to battle Coronavirus.

Trump was speaking at The White House press briefing when he came out with the outlandish claims:

I see the disinfectant where it knocks it out in a minute. One minute. And is there a way we can do something like that, by injection inside or almost a cleaning? So it’d be interesting to check that.

Supposing you brought the light inside of the body, which you can do either through the skin or in some other way. And I think you said you’re going to test that too. Sounds interesting.

Not only is this statement 100% untrue it will also most likely kill anyone that actually tries it, making it possibly the worst statement that any political figure has ever come out with in history. You just know some idiotic American Trump supporters are going to try it out as well.

In case you don’t have enough common sense to realise that this is a bad idea, here’s what Dr John Balmes of San Francisco General Hospital, said about Trump’s recommendation:

Inhaling chlorine bleach would be absolutely the worst thing for the lungs.

The airway and lungs are not made to be exposed to even an aerosol of disinfectant.

Not even a low dilution of bleach or isopropyl alcohol is safe. It’s a totally ridiculous concept.

So yeah if you were thinking about that then hopefully that’s enough to convince you not to bother, unless you want a one way ticket to an early grave. Don’t do it.

For more of the same, check out Trump reacting furiously when a picture of him became a meme. Nothing surprises you with this guy.