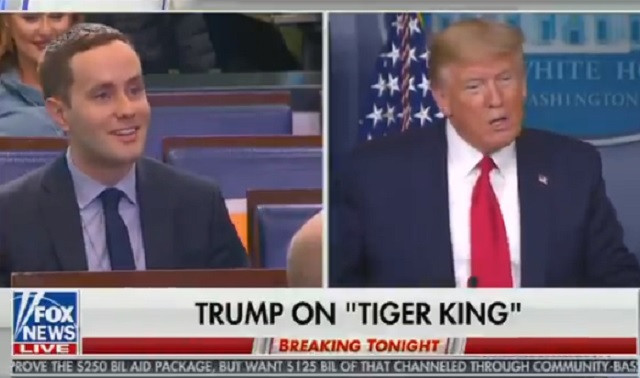 Which idiot is asking him about this?

There are two main cultural threads at the moment in the world: ‘Tiger King’ and the Coronavirus pandemic, with one clearly more important to everyone in the world than the other. Or so you would think.

You would imagine that the most powerful man in the world would be spending every waking moment trying to do whatever he can to slow the spread of the Coronavirus around his country to ensure its health service doesn’t become overwhelmed and countless people end up dying, but instead Donald Trump has said that he’ll be taking a look at Joe Exotic’s case instead. Should probably dig out the reporter that bothered to bring up something so trivial in his White House press briefing as well – that honour belongs to NY Post White House correspondent Steven Nelson. Make some room on your shelf for that Pulitzer pal.

#BREAKING Video: Trump is ASKED by a reporter about #TigerKing and how @DonaldJTrumpJr took issue with Joe Exotic’s sentence and whether he’d consider a pardon.

Smirks and says “I’d take a look” before shaking his head. He also asked @Acosta if he thinks he should pardon him. pic.twitter.com/Y7F9jxIj2t

Well, at least Trump hasn’t wasted seven hours of his life binge watching a Netflix show during a global pandemic that he’s pretty much in charge of sorting out. Either that or he’s good at bullshitting/lying but to be honest Trump is the kind of guy who would just blurt out if he had watched it if he had, no self control on the guy. Kinda rate the way Trump entertained the question but also for once used his talent for conveying complete disdain for someone at the right juncture.

And what about this Steven Nelson guy anyway? Really can’t believe that NY Post guy asked him such an inane question though. I mean I guess I’m writing about it and it’s probably gonna go viral, but seriously man we don’t have time for this shit during a global pandemic when loads of people in America are still going about their business like nothing is wrong. Kinda sums it all up I suppose.

For more of the same, check out Donald Trump Jr saying Joe Exotic should get a pardon. Guess he’s got time to watch ‘Tiger King’ hey?