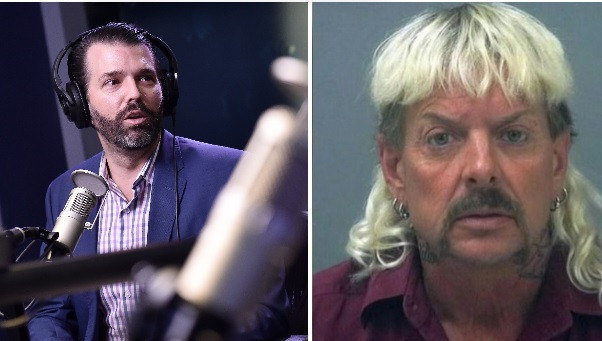 Since ‘Tiger King’ was released on Netflix a couple of weeks ago, we’ve had a load of different hot takes on the situation but I don’t think that any of them have been as hot as that of Donald Trump Jr, who wants to hand Joe Exotic a Presidential pardon ‘because of the meme’.

This is the same Joe Exotic who hired a hitman to kill someone, killed multiple animals in cold blood and coerced a couple of vulnerable heterosexual boys into marrying me and effectively becoming his sex slaves after plying them with drugs. Sounds like he should definitely get off ‘because of the meme’, right?

Trump Jr was appearing on SiriusXM’s ‘The Jim And Sam Show’ when he made the ridiculous comment, saying the following:

Maybe not right now, but I can generally be for this just for the meme. And just for frankly watching the media reaction to this thing. It would be pretty amazing to ultimately see that.

But when they’re saying ‘we’re putting this guy away for 30 years,’ I’m saying that seems sort of aggressive.

Sounds like he really has a handle on the situation there doesn’t it? Possibly more than his father does with the majority of policies. Hopefully ‘because of the meme’ becomes an official reason for enacting government policy in the future. Wouldn’t put it past these jokers.

For more of the same, check out some of the shit we didn’t see on ‘Tiger King’. There’s so much more to the story.