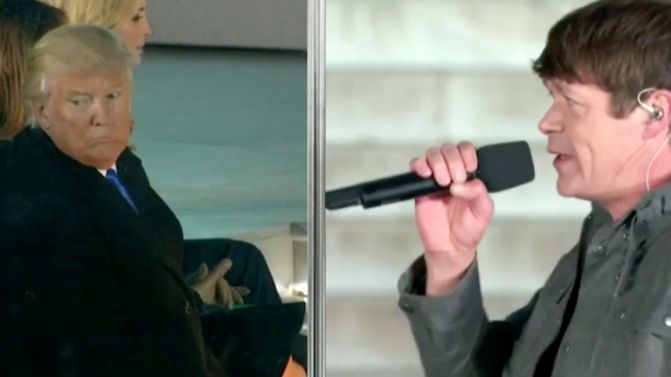 It’s been well documented that pretty much every A-list star who was approached to play Donald Trump’s pre-inauguration party turned the new President of the United States down and the only act that would agree to do it were 3 Doors Down.

Many people reading this probably don’t know who 3 Doors Down are, so let me inform you. They were a ‘modern rock’ band that had a big hit in the year 2000 with ‘Superman’, which somehow enabled them to become platinum selling artists. I don’t think the band has actually done anything worthy of talking about since then, but apparently they’ve released a bunch of records that have charted really highly in America. They basically appeal to the same people out there who listen to Nickelback… exactly.

Anyway, 3 Doors Down played last night at Trump’s pre-inauguration party and there was a camera on Trump the whole time as he bobbed his head along awkwardly to a song that he’s never heard and pretended to enjoy it, whilst wondering why he couldn’t have paid anyone better to perform. It really is a sight, and should probably be made into a meme alongside the phrase ‘We Made America Great Again’:

3 Doors Down perform their song "Kryptonite" at the inaugural concert https://t.co/UYpqI3esEb https://t.co/nUuRnC3eiT

Yeah, looks like Trump was really having a ball there with that one. Loved the way he pointed at a few things during the performance as well. 3 Doors Down sound like they’re still rocking as well – guy has got a great set of pipes.

Hopefully Trump’s actual inauguration won’t be as painful as this, and if it is then you can try the Donald Trump inauguration drinking game to get you through it.