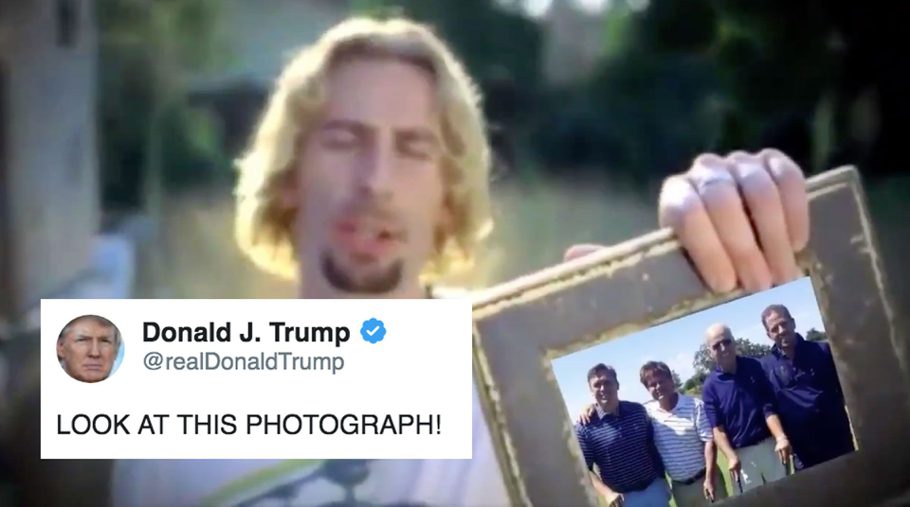 Look at this photograph.

It seems like I’ve written ‘just when you think Donald Trump can’t get any dumber’ about a hundred times since he’s taken office but it’s hard not to when all his actions just keep getting more and more ridiculous.

His latest escapade of course comes via his Twitter account where he used a famous Nickelback meme to undermine former Vice President and the head of the Democrats impeachment enquiry Joe Biden by suggesting that he and his son had underhand businesss dealings with the Ukraine. To do this he literally posted the video of Nickelback where you can put someone’s picture in Chad Kroeger’s hand as he sings ‘look at this Photograph’ and put a picture of Biden, his son and ‘Ukrainian gas chief’ in the picture frame. You couldn’t really make this up.

The actual tweet has now been deleted, but you can see it about halfway through this news report on the subject. The news report also tells us that this is pretty much completely and utterly fake news as the picture is taken in 2014 and the Ukrainian gas chief is Hunter Biden’s long term business associate, long before they ever went over to the Ukraine to do anything.

So that’s kinda a skewed version of reality there as Trump was clearly implying he was some Ukrainian gas mogul that Joe Biden was pretty close friends with through the meme. That just isn’t true whatsoever, but in the era of fake news what can you trust? You tell me.

Anyway take a look yourself and see what you think:

1) The “Ukraine gas exec” with Biden in this photo is actually just Hunter Biden’s longtime business partner, well before they ever went into business in Ukraine

2) This is actually pretty funny, and a frightening example of how effective propaganda is able bypass factual issues https://t.co/XBcoMvr75g

Really, really stupid, but can we expect any less from Donald Trump these days? Not really.

Despite the fact he’s tweeting fake news himself when he’s always banging on about how it’s being used against him, the real controversy here is that he used a Nickelback meme to get his point across. A meme that’s nearly three years old I might add, but I suppose it’s fairly apt in this situations so we can let that pass.

Firstly, does this imply that Trump is a Nickelback fan? You wouldn’t put it past him as he seemed to be getting into Three Doors Down at his inauguration and they play a similar style of what can only be described as country dad rock. And to be fair, Nickelback and Donald Trump do kinda look like they go hand in hand, right?

Secondly, you might think that this might cause Trump to lose some of his popularity in the states because Nickelback is an almost universally mocked rock band but I would argue it might actually cause him to become more popular. You see against all the odds Nickelback are one of the most popular bands in the world, despite nobody ever meeting a Nickelback fan, so you can imagine they all exist in the rust belt and middle America where nobody ever goes and this is exactly where most of Trump’s supporters are to be found. Probably a direct correlation between their music tastes and voting habits. Just saying.

For more of the same, check out when Nickelback released some weird white boy funk disco song. Even worse than their usual output.