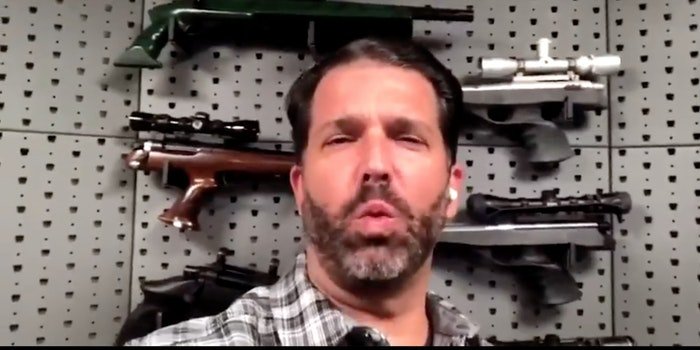 Donald Trump left The White House for the final time about a month ago and we’ve heard very little from him since then, mainly because a whole bunch of social media platforms have banned him from posting on them for all time now. Lol.

Sadly, the same courtesy hasn’t been extended to his son Donald Trump Jr, which means he’s still posting up ridiculously weird videos like the one below that literally makes him look like a crazy American who’s convinced that it’s the end of the world and they’re broadcasting from their underground bunker. The video features Trump Jr – who sounds as if he’s been snorting cocaine again – talking about how all the teachers in America are pussies for being too scared to go back to work, but is perhaps most notable because there’s a massive gun rack on the wall behind him the whole time he’s talking.

Why would anyone think that this was a good image for the guy to portray?

This looks and sounds like an extremist video posted from a bunker of undisclosed location pic.twitter.com/LNWmiUN96I

So weird that this is the image that he’s trying to cultivate after he was literally involved in a failed coup less than a month ago. I guess this is what he’s going for now though and we can expect regular crazy cocaine addled updates from his secret bunker for the rest of his life. I suppose they’re kinda funny if you can get over how damaging they are to the welfare of the world.

For more of the same, check out Donald Trump Jr talking about Syrian refugees. Absolutely outrageous.