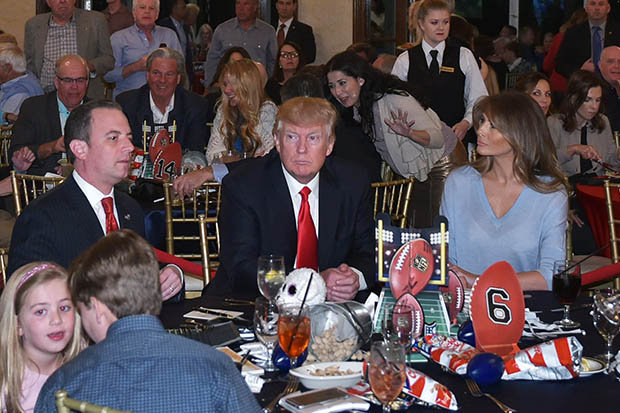 These two really don’t seem to like each other.

Ever since Donald Trump became President, there’s been a running joke that his wife Melania hates him and hates spending time, but it just seems to get more and more serious. the latest incident happened when both of them attended a Superbowl party at Trump’s Mar-a-Lago golf club in Florida.

Here’s a video of Melania from the party where she just kinda sits around smiling awkwardly whilst Trump talks to White House Chief of Staff Reince Priebus and pretty much ignores her. He does say something to her towards the end of the video but it doesn’t seem much more than a passing comment after she’s tried to join in and he’s right back talking to Preibus again pretty much instantly:

Yeah, she really does look like a woman going through the motions doesn’t she? Bet she’s still insanely pissed off that Trump made it as President and she has to go to all of these boring ass functions all the time. She clearly isn’t having a good time, and if you don’t believe us then check out these other photographs of her having a shit time with President Trump. Almost feel sorry for her. Almost.

In other news, Trump actually left the Superbowl party so he missed the greatest comeback in American football history. What an absolute numpty.