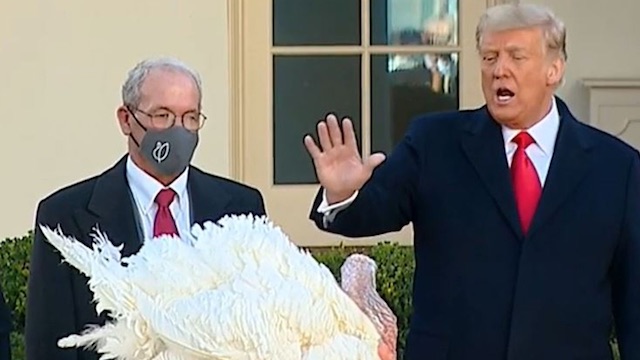 It was announced yesterday that Trump would begin transition proceedings for allowing Biden to move into the White House and being his Presidency in January, as it seems like his hopes of having the election results reversed or declared fraudulent have well and truly bitten the dust.

However, in the build up to Thanksgiving over in America a video has emerged of Trump’s 2018 turkey speech where he jokingly predicts his own reaction to the 2020 election. There’s a really weird tradition over in America where the President pardons one turkey on Thanksgiving at The White House and well, just look at the jokes Trump tried to crack back in 2018:

L.O.L. That has not aged well.

I know this can be applied to all manner of people in all manner of events, but I find it so funny that he literally tried to make a joke about a turkey’s reaction to an election and ended up acting exactly the same way himself not even two years later.

I suppose you can’t really be that surprised with everything that goes on these days, but it’s still a major joke isn’t it? Might as well enjoy it before the next bullshit thing happens this year.

For more of the same, check out this Christmas dinner pizza that was recently released. Awesome.