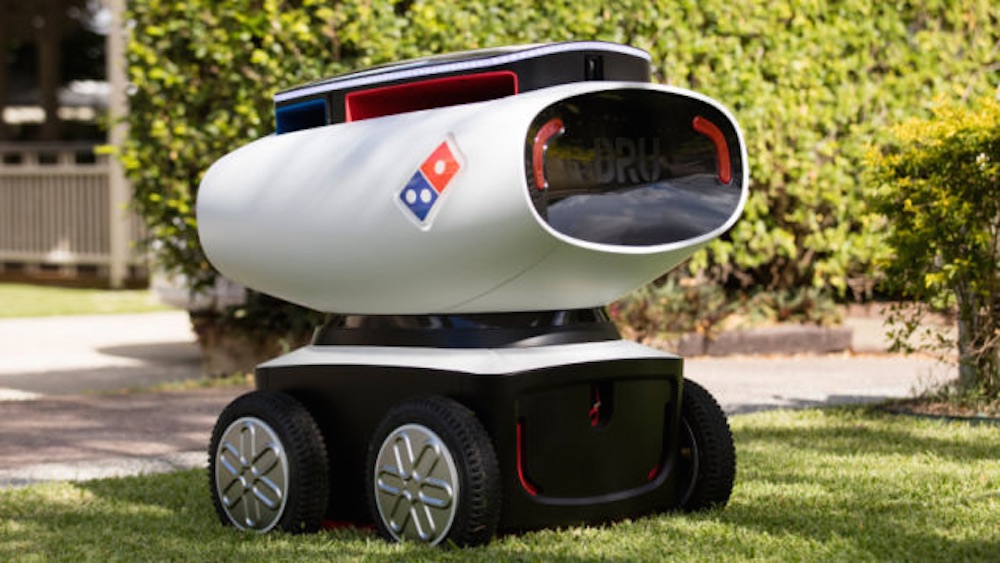 Pizza delivery is going next level.

If anyone out there is still working as a pizza delivery boy for Domino’s then your days might be numbered. Not only have they started delivering pizzas in remote controlled helicopters, but they’re also trialling pizza delivery robots on the ground over in New Zealand.

The bot is called DRU (Domino’s Robotic Unit – original) and has already completed its first successful delivery on March 8th. It uses software developed by Australian military contractor Marathon which already uses robots with obstacle avoidance technology programmed into them.

This means that DRU can avoid all the problems it might encounter on the way to delivering your pizza. It has ten compartments to store your various orders and these can keep pizza hot and ice cream or drinks or whatever cold. It’s also able to deliver up to 20km from the Domino’s before it needs to charge its battery.

Here’s a short promo video for it:

I mean that sounds pretty good but there’s a couple of problems I can see with it. I mean firstly it’s surely going to be a lot slower than getting someone to deliver it in a car or on a motorbike, right? That could be an issue.

Secondly, how the hell is it going to defend itself from anybody it runs into? OK, not everyone is going to do this but there are definitely some people who would see this robot buzzing along the street and beat it up and steal the pizzas, it goes without saying.

Marathon have said that they ‘will be taking every precaution necessary to ensure he is safe including surveillance and security etc’ but I’m not sure how they can do that without sending someone out with him or installing it with a taser or something, neither of which seem like plausible options.

I guess we’ll have to wait and see. If you’re a pizza delivery boy though you should probably start looking into other jobs though because your days are numbered. Won’t be getting any tokes on a blunt for delivering pizza anymore either.