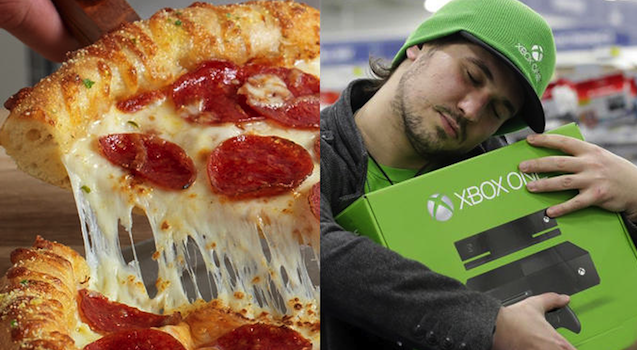 For those of you that get anxiety attacks when ordering pizza, there’s now an even easy way to order.

Everyone knows that ordering pizza can be really stressful – picking what you want, phoning up the pizza place and actually making the order –  so it’s great that places have tried to reduce the effort it takes to order the pizza by including online options. Either that, or they’re sick to death of being pranked by annoying kids.

It looks as if they’re taking the ease of ordering to the next level – or at least Domino’s are – by developing an app for the X-Box One that allows you to order pizza through the console by literally screaming ‘Domino’s, feed me’ along with your choice of toppings and the delicious meal is then on its way to your doorstep.

Unfortunately you’re going to have to get up and receive it from the door – and maybe even pay the man – but it’s still a darn sight better than scrolling through a menu and phoning up/clicking around online to try and get the best deal.

It was inspired by the Pizza Hut app on the X-Box 360 which allowed people to order from the console when they were completely baked in multiplayer heaven. It wasn’t as easy to do so as this one, but it still managed to account for $1 million of sales so it’s safe to say they’re onto a big winner with this one.

Might have to buy an X-Box One just to try it out.