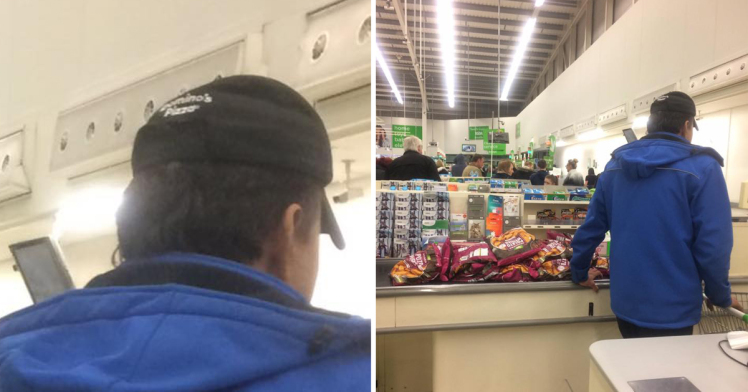 So that’s where they get them from.

Do you ever wonder where your takeaway food actually comes from? I mean sure, we all know that we’re ordering from Domino’s or Pizza Hut or US Way Pizza or whatever. But are they making all that garlic bread, pepperoni and those potato wedges themselves?

Turns out that they’re absolutely not, at least in terms of the potato wedges. We know this because a Domino’s employee got absolutely busted the other night in Asda buying a shitload of their potato wedges. The following photograph was posted on Facebook by someone called Suzanna Fraser in a place called Whitenich, which is apparently in Glasgow:

Boom, absolutely rinsed and there’s no denying it. This completely takes the piss when you consider you get a shit tonne of wedges in one of those bags for a pound and Domino’s charges you £4 for not even half as many. Maybe buy your own wedges next time and save yourself the hassle.

Domino’s have predictably come out with a statement to try and control the damage to their reputation, but in fairness a big multinational like them probably can’t control all of their franchisees as strictly as they would like:

With a big sporting weekend, very occasionally our stores are in an unfortunate position where some products may run out. We do not advocate this as a solution and are investigating.

We have rigorous standards where our franchisees buy all food from our approved suppliers to help maintain the high standards customers rightly expect.

I mean I suppose it was the Superbowl this weekend so a lot of people were ordering pizza and wedges. Maybe we can let them off this time? Nah, gonna troll them about this forever obviously. At least they admitted it I suppose. Asda wedges are probably nicer than Domino’s anyway.

For more Domino’s, check out their pizza delivery robot that’s meant to be hitting the streets soon. Wonder if they can pick up wedges as well.