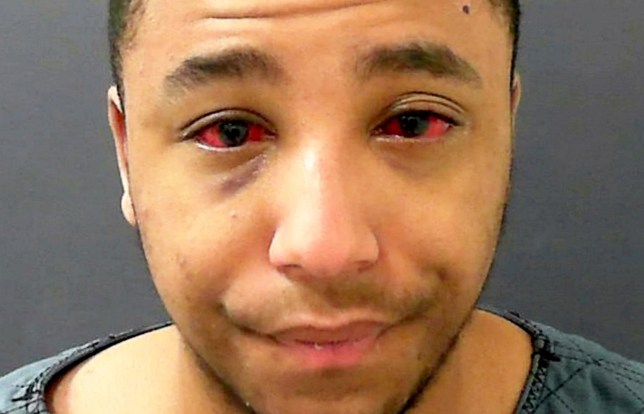 A man has been jailed for three years after attacking and sexually assaulting several women in one night while drunk and stoned off his face.

Dominic Rios, 19, got more baked than possibly anyone else in history (judging by that mug shot) and went out looking for victims in Harrogate, North Yorkshire in June.

According to the Metro, his victims were aged 15 – 22 and were all females who were walking alone.

His first victim, 22, was walking past Asda when he approached and told her ‘I’m going to kill you. There’s no cameras here, there’s nothing you can do about it.

The woman froze in fear and started begging to be left alone but he responded by spitting some half-chewed crisps at her. A woman passing by saw the woman crying and called police, so Rios walked off.

Prosecutor Stephanie Hancock said he then collapsed and went into a foetal position before walking off.

He then went on to target a woman who was walking her dog and had stopped to look in a shop window.

Nose to nose he told her clearly but menacingly: ‘I’m going to kill you, look into my eyes.’

She asked him to leave and backed off, trying to hide behind a van. Rios then bent down and said he was going to kill her dog before walking away towards a theatre in the town.

Which brings us to:

A worker told him that the theatre was closed so he could not come in. However he forced his way past her, muttering incoherently.

She alerted other people in the theatre to stay upstairs as he sexually assaulted her saying ‘there’s nothing you can do about it’.

She managed to fight Rios off but she was groped again before he staggered off.

He then went to McDonald’s where he goaded and threatened customers before being told by the shift manager to go outside.

Rios clenched his fists and said: ‘Do you want me to smack you?

As he exited the restaurant:

He spotted a girl, 15, who was about to get food and sexually assaulted her.

She managed to get past him and the shift manager closed the doors to the McDonald’s, but one of the girl’s friends was physically assaulted.

When he was arrested he slapped a police officer in the face. 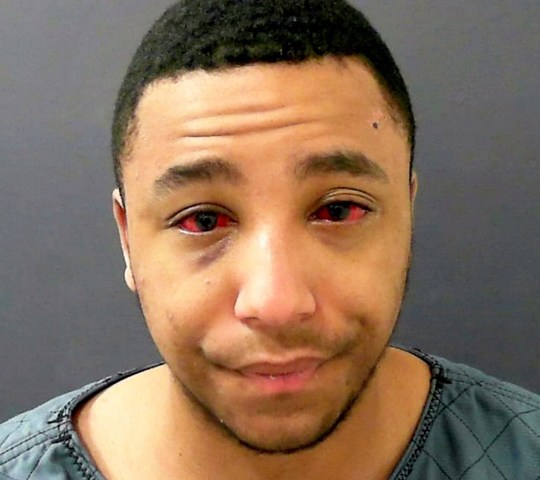 What a piece of work this guy is eh? Rios blamed his actions on a ‘psychotic episode’ and claims not to remember a thing about that night. I mean he was obviously completely fucked up on skunk and alcohol – a lethal mix indeed. I don’t think I’ve seen red eyes that bad since the high school student who was interviewed about a gunman at his school.

Rios was placed on the sex-offenders’ register for 10 years and made subject to orders which prevent him contacting or approaching the victims. Surprisingly no jail time, even after assaulting several women and smacking a police officer.

Bit weird, but maybe not that unusual considering the infamous ‘zombie knife thug’ had to re-offend 22 TIMES before he was put into prison.