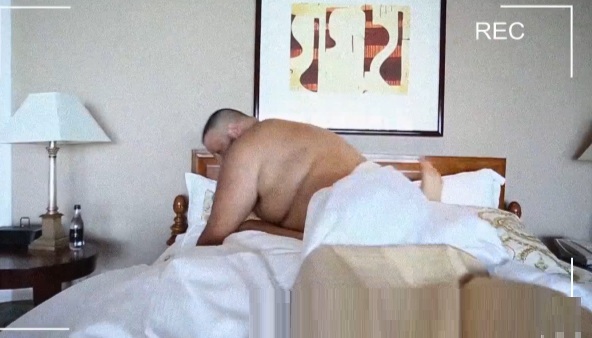 This is one of the most disgusting things we’ve ever seen.

DJ Khaled is that fat guy who seems to be in every rap video shouting his name and showing his chains. Last year his track ‘Hold You Down’ went to number one in the US chart. Despite the fact that Khaled didn’t rap or even produce the track, this didn’t stop him from flying to the Bahamas to celebrate.

The 10-minute video is mainly DJ Khaled telling everyone that he’s number one, he’s the greatest and that he’s doing this for the streets. Not sure how popping magnum bottles of champagne in his private swimming pool is for the streets but who are we to question the great DJ Khaled?

The one true highlight of this video is a snippet of Khaled’s sex tape with some poor girl below him. He bellows ‘You smart! You loyal! You a genius!’ with each terrifying thrust. It’s like when you’re about to witness a car accident. You don’t want to watch what’s about to happen but at the same time you can’t keep your eyes away.

I won’t bore you with the 10-minute version of DJ Khaled telling you why he’s better than you, but you should watch the 90-second trippy version below. As well as covering all the bases included in the ten-minute video, it completely rips Khaled for being the creep that he is and mocks the inspirational stance he adopts.

Overall, I think it’s fair to conclude that DJ Khaled is a monumental bellend. The man doesn’t seem to do anything, yet still makes millions from slapping his name on these tracks. Perhaps if the rap game dries up, he can turn his eye towards other projects, like Rick Ross when he featured as an Agony Aunt.