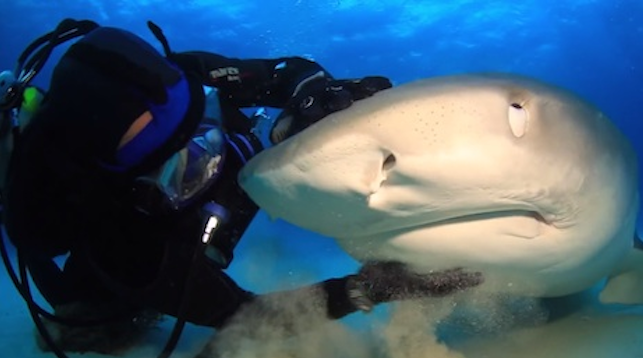 Comes with a really creepy commentary too.

When I see a Tiger Shark, my first instinct is to get the hell out of there and not look back.

The guy who made this video is a bit different though – he would rather swim up to it and rub it on its chin, giving it an orgasm. I’m not sure how or why that happens but it’s certainly enjoyable to watch a shark get off.

I’m not so sure about his creepy Stephen Hawking-esque commentary – that’s just completely weird, especially how he sounds like he’s pretty much in love with the tiger shark. It reminds me a lot of the guy who had sex with a dolphin and then fell in love with it.

The commentary does make the video a lot funnier though but also makes the whole thing completely surreal and weird, almost like a David Lynch movie. And don’t get me started on the television movie of the week music he’s put in the background too.