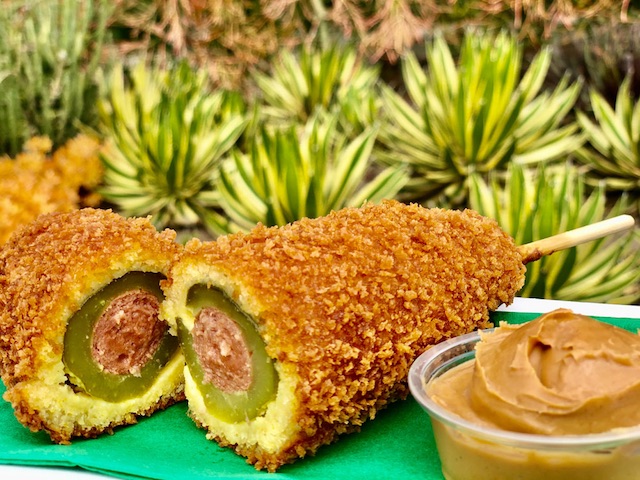 I’ll be honest, even though I’m a big fan of theme parks I don’t think that heading back to one of them is going to be one of the things I’m looking forward to the most after the global pandemic, and maybe Disneyland are feeling that vibe as well which is why they’ve gone to extreme measures to entice people back by introducing this quite frankly offensive new menu item at their parks.

I know this is in America, but even over there I’ve never seen anything like this monstrosity of a hot dog which has been stuffed inside a dill pickle and then deep fried. If that doesn’t sound disgusting enough, it then comes with a side of peanut butter.

It was first reported by New York Times reporter Brooks Barnes and I was hoping that it was an April Fool’s Joke – much like his name could be as well – but he posted about it yesterday so I don’t think it is?

Disneyland is advertising a hot dog stuffed inside a dill pickle that is fried and served with a side of peanut butter. (Heart defibrillators 50 cents extra.) pic.twitter.com/oLEMjyMCvO

What an absolutely monstrosity. Again, I get that this is America and it’s their dream to devise a heart attack on a stick, but even for them this is a bit much isn’t it? I think it’s the peanut butter as a side that gets me – it’s almost like they came up with a way to make it look even less appetising and just rolled with it. What ideas do you think were rejected before they settled on peanut butter? Jesus.

Obviously though the worst thing about it all is the main event. I suppose sometimes you get a hot dog with a few pickles on it, but I don’t think anyone needs to eat one that’s literally inside one, especially when it’s been deep fried as well. Just think about what that’s gonna taste like when you bite into it – such a weird range of textures and it doesn’t even have any cheese or anything to soften it up. Rank.

There’s a thought though, imagine if they had to add cheese to it as well to make it more palatable?! Jesus.