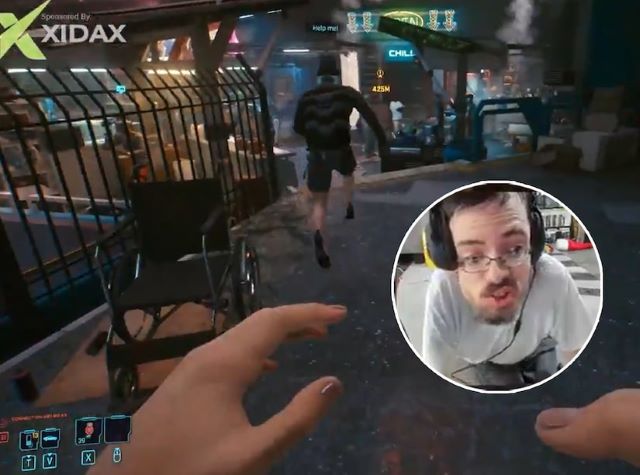 The release of Cyberpunk 2077 has been such a disaster that Sony has abruptly pulled the game from the Playstation store, owing to an overwhelming backlash over the game’s countless bugs and glitches, and sub-par graphics on last gen consoles.

In fact there are so many bugs in this game that you can hardly find a clip without one. YouTuber Ricky Berwick, who was born with Beals-Hecht syndrome, seemed genuinely delighted by the representation of wheelchair users in the game… until he came across this particularly irksome bug:

What a disaster. It’s one thing if the NPC was designed to be a wheelchair faker who was pretending to have a disability, but the way he glitches into the chair before taking off running suggests it’s just another in a long list of bugs that completely ruin any sort of immersion. They really need to roll out those patches and fix this game ASAP!

In any case, pretty funny that Ricky was the one to come across this bug. If you’re not familiar with Ricky Berwick, he has 2.15m followers on his YouTube channel, in which he talks gaming, life in a wheelchair, and generally just creeps people out:

What the internet was made for, I guess?

For reports that Cyberpunk 2077 is causing epileptic seizures in its players, click HERE. How many more ways can they cock this game up?