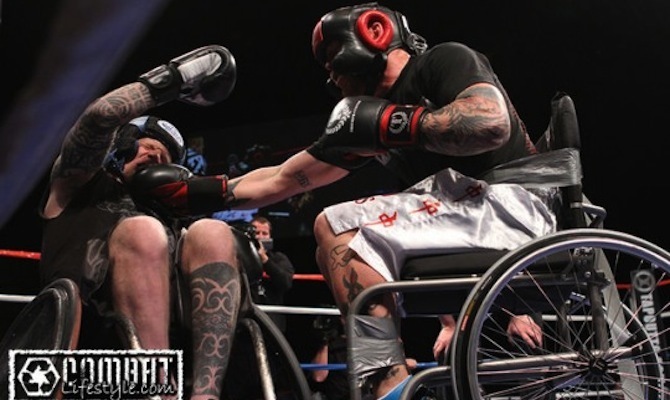 On the heels of last year’s Paralympic games in London, a South-Yorkshire based MMA promotion called Wheeled Warriors began promoting and putting on events featuring fighters in wheelchairs. There was an obvious backlash, but ultimately it was decided that people who are confined to wheelchairs have as much right as anyone else to beat the shit out of each other in a controlled, professional fighting environment. After all, wheelchair MMA was already a thing elsewhere, so questions started being asked as to why it couldn’t also be a Paralympic event like basketball, judo and other competitive and combat sports.

Some argued that the fighters were being exploited as some kind of circus act, but the fighters themselves shunned the idea. These guys obviously enjoy their MMA, and they do it because they want to.

You may have heard of the one-armed mixed martial artist — Nick Newell — who whoops fully-limbed fighters on a regular basis:

Not disabled enough for you? Kyle Maynard is an amputee with four stumps for limbs who has also fought (and lost) one fight in MMA:

So what about Down-syndrome Garrett Holeve? Last March, Holeve appeared in a TV documentary explaining how many felt his disability ruled out any possibility of him ever competing in a sanctioned mixed martial arts match. Promoters and commissions were unwilling to take the risk. David Steffan, who suffers from mild cerebral palsy, saw the documentary and related instantly to Holeve’s failure to find a fight. Steffan got in touch with Holeve and volunteered himself as a potential opponent.