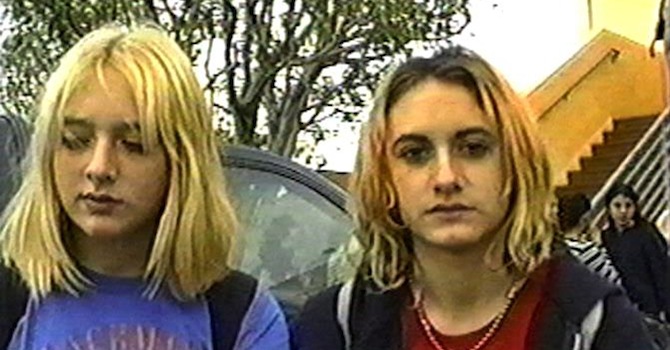 I saw Dirty Girls a few weeks ago and was hooked, watching it over and over before realising I could actually get in touch with these heroes and answer the questions rolling around in my head.

Before you read these interviews, check out the short documentary ‘Dirty Girls’ posted below. I saw the film a few weeks ago and was hooked, watching it over and over before realising I could actually get in touch with these heroes and answer the questions rolling around in my head. I was drawn in by the strength of Amber and Harper and blown away by their awesomeness. How did this all happen in the first place, so perfectly? How could they know that they had created something so timely and pertinent? Where were the Dirty Girls now? And what are their plans for future world domination?

First I talked to director Michael Lucid on the making of the Dirty Girls.

SC: How old were you when you shot the first Dirty Girls? Were you the same age as the girls?

M: When I shot the original Dirty Girls video, I was 18 years old and a senior in High School, and the dirty girls were 13 and 14 years old, and were in 8th and 9th grade at the same school.

SC: What was your relationship to them?

M: At the time, we were friendly with each other but didn’t know each other at all – we would just exchange friendly “hellos” when we’d see each other on campus.

SC: What was your motive, at the time, for filming them and what was your attitude towards them?

M: At the time, I originally filmed them to share the footage with an after-school video club that I was in. The Dirty Girls were notorious on campus, everyone at the school knew about them, but no one had
interviewed them or gotten their side of the story. I was fascinated by The Dirty Girls, and thought they were really cool. I was excited to interview them and learn more about them.

SC: What was your position in the social order of that school – did you relate to the girls, were you guys friends?

M: At school I was the friendly kid who was sort of on good terms with everybody. I think that’s why people from all of the different social cliques were willing to speak with me and my video camera. I admired the Dirty Girls, and I thought they were much cooler than I had been at their age. When I was 13, I would make comic books with my friends, and photocopy them and pass them out at school, something I’m still proud of. But these girls were making sophisticated Riot grrrl zines at that age! It really blew me away. I filmed this footage just a few months before I graduated from the school, so I didn’t get a chance to become closer friends with them at the time. But now that we’ve been in touch again since the video’s gone online, we’ve gotten to know each other much better now, which has been great.

SC: How did they react to your filming at the time? In the film you can see that sometimes they hide their faces.

M: When I filmed them at the time, they alternated between acting embarrassed and self-conscious, and being really gracious and appreciative that someone was actually asking them for their side of the story. Sometimes they would really ham it up for the camera, and at other times they would seem weary of being followed around all day and being asked so many questions. I think that’s why in the video you can see a variety of reactions from the girls about being filmed.

SC: What prompted you to revisit and release the film this year?

M: A film festival in New York contacted me a month ago asking if I would upload the video to YouTube – they had heard about it, and they wanted to consider it for the festival. I gladly obliged, and I was very surprised by its fantastic reception online!

SC: Had you kept in touch much with the girls over the years?

M: I had reconnected with the girls in 2000, and even shot some follow-up footage with them that I never used. Then I added them as friends on Facebook awhile back, maybe a year ago. I think I went to their New Year’s Eve party once randomly too, around 2002 or so. But other than that, we’d been completely out of touch with each other until now.