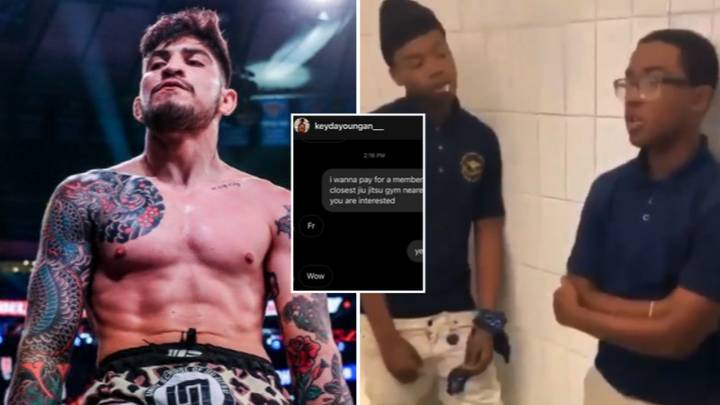 Conor McGregor’s buddy Dillon Danis might be one of the most hated men in MMA (owing to his trolling and ‘feuding’ with Jake Paul), but it turns out he’s actually a pretty awesome dude.

A couple weeks back, this horrible video found its way online in which a gang of bullies surround a helpless school kid and beat the shit out of him:

these videos break my heart nobody should have to go though this, if anyone knows how to contact him i wanna get him into martial arts immediately #fuckbullies pic.twitter.com/Mz5vEHj8Qo

Dillon Danis immediately Tweeted out that he was going to help out the victim, and this week he proved that he’s a man of his word:

I am so proud of this young man for taking me up on my offer and getting into the dojo. Showing up is half the battle and that applies to everything in this life. We’re all in this together, let’s go champ! pic.twitter.com/mRTpMFlW1n

As you can see, he got in touch with the bullied child and got him started in his local jiu-jitsu gym. He even arranged his Uber to pick him up to and from the gym.

No matter what kind of dickhead behaviour Dillon Danis engages in from now on, the fact he is helping out young boys like @keydayoungan_ makes him OK in my book. Like he says that video is just heartbreaking – look how innocent that poor kid looks, how could anyone feel like they have to beat the shit out of him? Nothing worse than piece of shit bullies.

Speaking of which, look at how this one kid uses his own MMA skills to completely destroy his bully’s life. Love to see it.